The Cyclops has arrived, and is now en-route to the MechBays of eligible MechWarriors. Though some of its variants are relatively under-armored compared to other Assault BattleMechs of a similar tonnage, the above-average top speed of the Cyclops combined with the inherent Sensor Range boost of 150m for itself - and 100m for any allies within its radius - suits the Cyclops chassis toward a focus on front-line command and support.

The in-game Store now has a Cart-based system to make purchasing easier and faster, particularly when purchasing multiple items at once. Once items have been added to the Cart you can increment their quantity (when applicable), rename a 'Mech, and swap between your choice of currency to use for each item individually. As part of this new Cart system we have also set the default currency in the Store to use C-Bills (when applicable), instead of the previous default of MC.

Crimson Strait has received an art update in this patch, featuring Time of Day, partially destructible columns under the saddle, and an array of other improvements to make the map more visually dynamic and pleasing. Aside from collision clean-ups and LOD improvements, Crimson Strait has undergone no layout or major gameplay-affecting changes.

92 new Decals are arriving in this patch, spread across the Basic (180 MC) and Special (500 MC) categories. A number of improvements to the Decal system are also included, such as the ability to flip a Decal when placing it. Equipped Decals can also now be swapped between slots to allow for easy layering adjustments. Check out the Decal section of these Patch Notes for all the changes.

The Art team are continuing to work on Pattern retrofits for the remaining 'Mechs without full Pattern support. In this patch the Atlas, Awesome, Centurion, Commando, Dragon, and Hunchback 'Mechs are the latest to receive Faction Pattern retrofits.

Rounding out the patch we have an array of map fixes and 'Mech fixes, including a Pattern fix for the Adder chassis and an improvement to shadow culling across all maps and all quality specs, rarity indicators for Supply Cache items, Category filtering for Decals and Cockpit Items, a Favorites system for the Select 'Mech menu to allow for quick filtering of your most-used 'Mechs, an improvement to connection times when returning from a match, and much, much more!

Read on for all the details, and we'll see you on the battlefield! 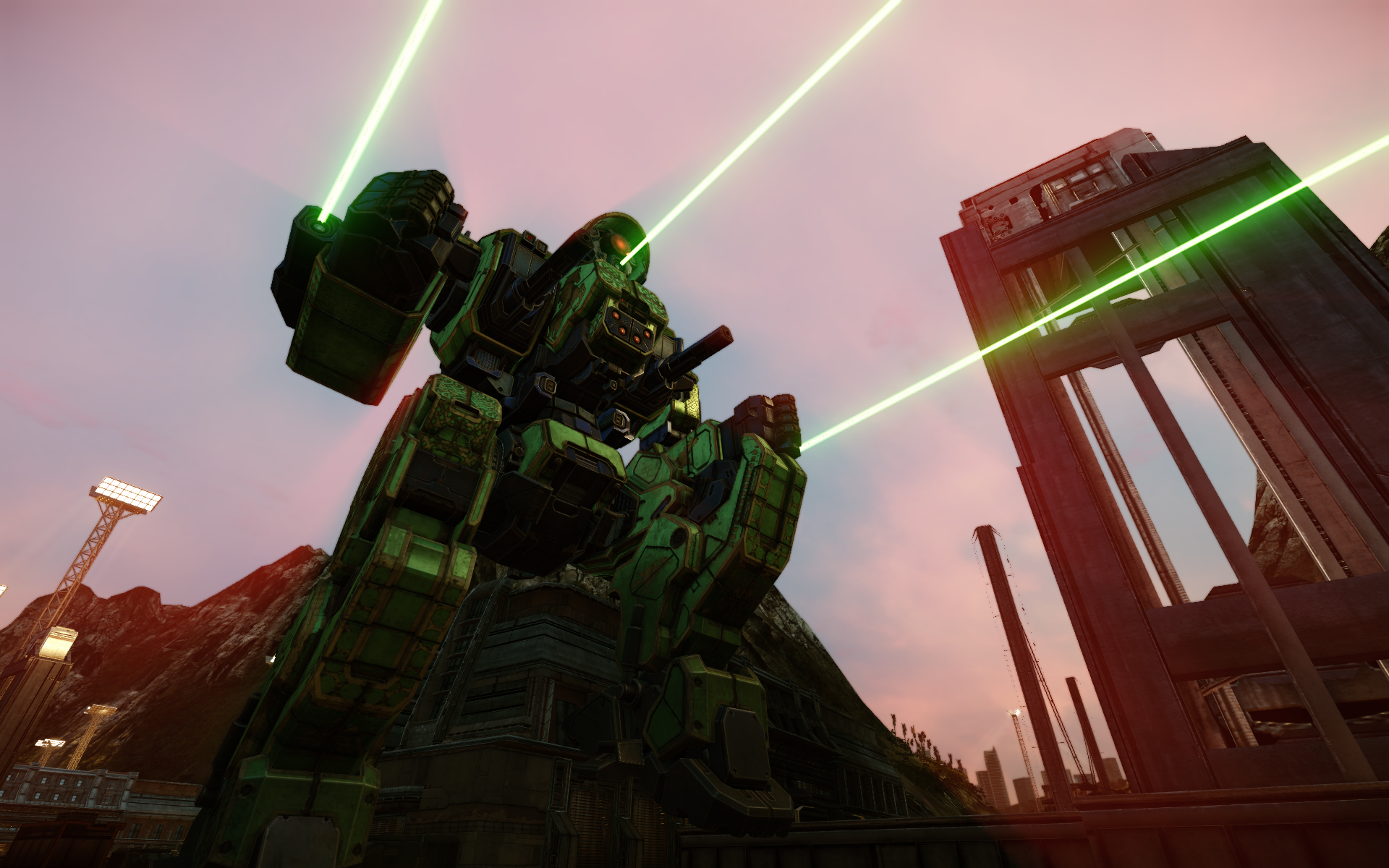 Per Star League Defense Force Quartermaster’s request, Stormvanger Assemblies, Unlimited delivered an assault command platform for Regular Army forces operating in swift, mobile offensives. Its above-average speed for a ninety-ton BattleMech—sixty-four kilometers per hour—superb command capabilities in its Tacticon B-2000 Battle Computer, and Olmstead 8400 communications system covered the requested specifications in spades. Unfortunately, many SLDF commanders often tried using the Cyclops as an assault BattleMech along the lines of more heavily armored Awesomes or Stalkers, only to find themselves outgunned with below-average armor. This earned it an unfair reputation, leaving it an unusual BattleMech, with most having lost their Tacticon long ago due to poor repairs and lack of supplies.

• CP-11-A
The CP-11-A is the standard version of the CP-11-A [S]. It does not possess the 30% C-Bill boost or the unique Pattern of its [S] counterpart. Until its release date for in-game purchase the standard CP-11-A is only available through the Standard Cyclops Pack.

• CP-10-Q
Until its release date for in-game purchase the CP-10-Q is only available through the Standard or Collector Cylops Pack.

• CP-10-Z
Until its release date for in-game purchase the CP-10-Z is only available through the Standard or Collector Cyclops Pack.

• CP-11-A-DC (Reinforcements Add-On)
Until its release date for in-game purchase the CP-11-A-DC is only available as a Reinforcement Add-On to an existing Standard or Collector Cyclops Pack.

• CP-11-P (Reinforcements Add-On)
Until its release date for in-game purchase the CP-11-P is only available as a Reinforcement Add-On to an existing Standard or Collector Cyclops Pack.

• CP-S "Sleipnir" (Hero Add-On)
The CP-S is the Hero variant of the Cyclops, featuring a unique Hero Pattern and a 30% boost to C-Bill earnings. Until its release date for in-game purchase the CP-S is only available as a Hero Add-On to an existing Standard or Collector Cylops Pack.

Along with their complimentary delivery to eligible Cyclops owners, the following Cockpit Items are also now available for purchase in-game:

These Titles and Badges are only available through their associated Cyclops Pack. The Collector Pack comes with both.

• 92 Decals have been added in this patch, spread across the Basic (180 MC) and Special (500 MC) categories.
• Equipped Decals can now be switched between Slots directly by dragging and dropping them from one Slot onto another. This will allow you to adjust Decal layering without needing to manually re-apply the Decals.
• Decals can now be flipped with the 'F' key.
• Decals can now be filtered by Category.
• Fixed an issue where certain Black colors could appear invisible over certain areas of a 'Mech.
• Fixed an issue where Decals could project onto environment geometry.
• Fixed an issue where environment Decals could project onto 'Mechs. The environment Decals removed in the July patch to mitigate that issue have now been restored.
• Fixed an issue where switching a colorable Decal (with a custom Color already applied) to a non-colorable Decal, and then back to a colorable Decal, would reset the custom Color to default.
• When switching to the Colors tab from the Decals tab, the Decal Colors window will now be selected by default.
• When switching to the Colors tab from the Pattern tab, the Pattern Colors window will continue to be selected by default.

You can access the Drop Deck system through the 'Manage Drop Decks' button found on the Home, MechLab, and Faction Play screens.
Each Drop Deck can be given a name for easy classification and identification. The Current Tonnage of each Drop Deck is also listed.

For Mercenaries and Loyalists, Drop Deck management is currently restricted according to your allegiance. In other words if you are currently aligned with an Inner Sphere Faction you will be unable to create a Drop Deck featuring Clan 'Mechs, and vice versa. Switching allegiances will still retain any Drop Decks you have already created. The Inner Sphere Drop Deck you created would still be present if you switched to Clans, for example. You could then either create a new Clan Drop Deck in another slot, or edit your existing Drop Deck. 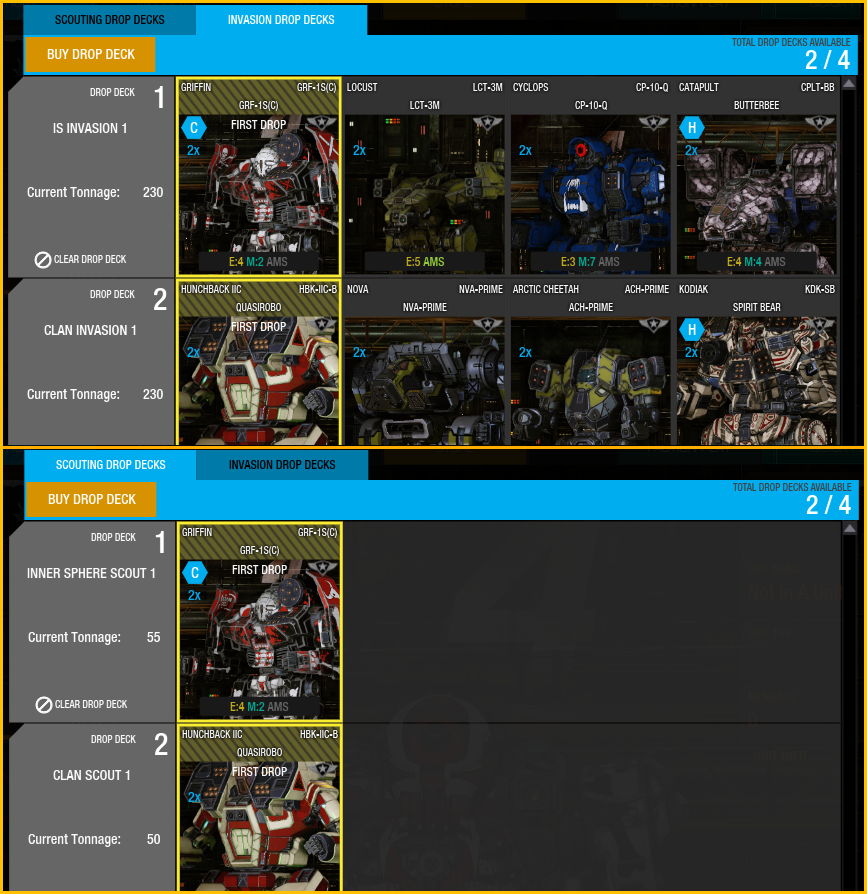 Purchasing multiple items through the in-game Store, such as 'Mechs, Consumables, or Supply Cache Keys, will now be simpler through the use of a new Cart system. When purchasing 'Mechs you can easily toggle which currency you intend to use. Certain items can be purchased in bulk by increasing their Quantity in your Cart.

In addition to the introduction of this Cart, purchasing a 'Mech will now use C-Bills as the default currency in the Purchase Confirmation window, when applicable.

Once an Item has been added to the Cart, a Cart icon will appear on the right side of your screen. Click on this icon to see the current state of your Cart and its items.

Items will have the same level of Rarity across all Caches they appear in. For example, a 7 Day Premium Time reward will always be Ultra Rare.

Please note however that there is currently a Known Issue in this patch related to Supply Cache rarity highlights for specific Caches. Certain Supply Caches are currently listing 1 Day Premium Time items with different Rarity levels across different Caches. 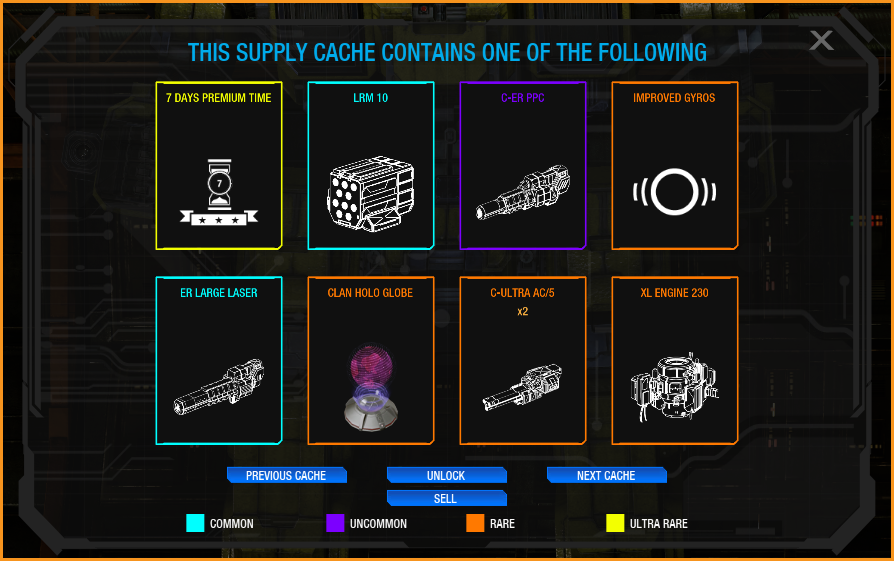 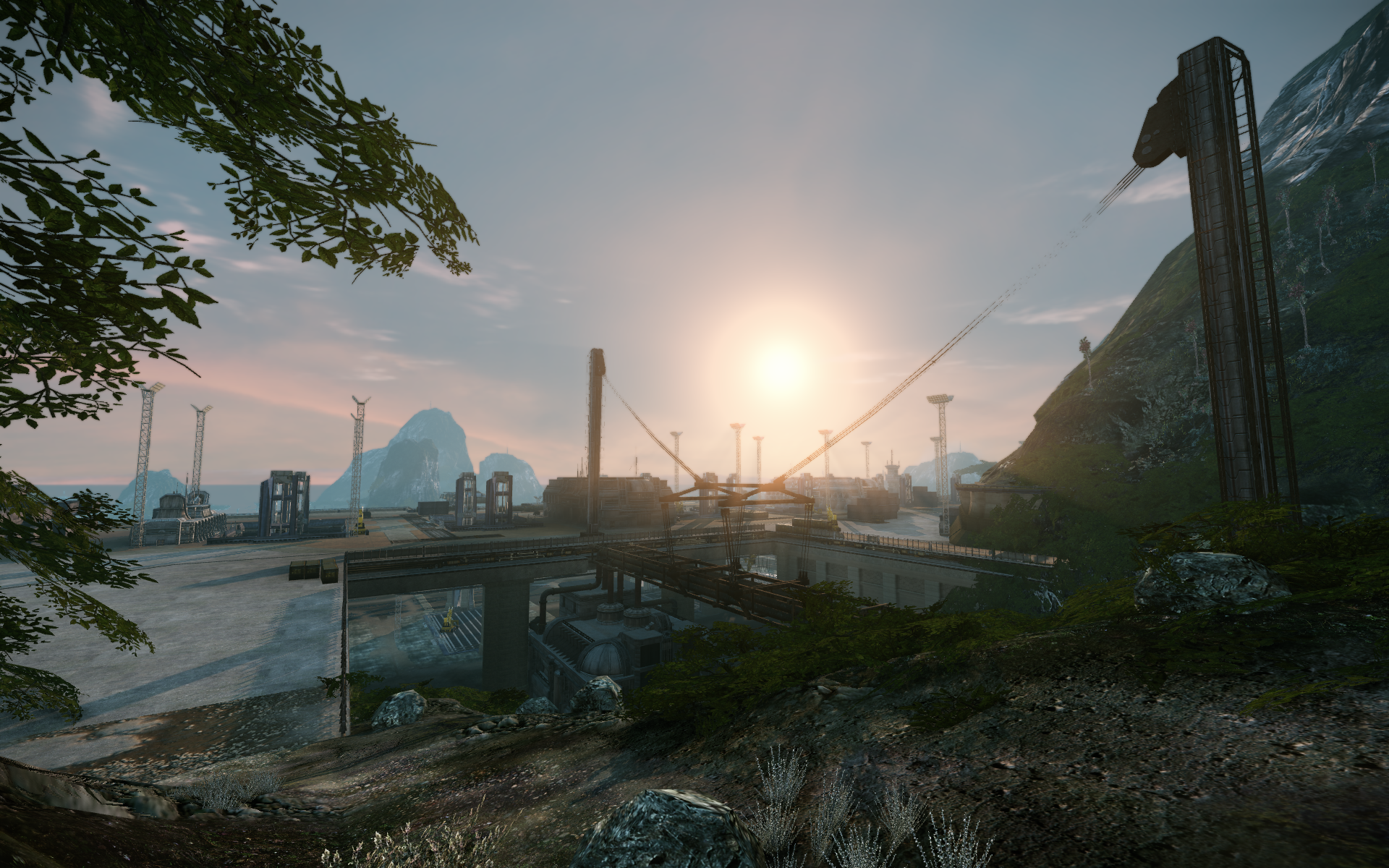 Hover your mouse over the above image to view a Time of Day timelapse of the updated Crimson Strait.
Still image / Timelapse GIF

Unlike our previous map updates, the changes you'll see in this patch for Crimson Strait are purely cosmetic.

• Map edges now have a black gradient applied.
• Maps will now use either light or dark gridlines and sector designations to better accommodate map brightness.
• Visibility of map details, including out of bound areas, has been improved.
• Gridlines and sector designations now extend beyond the gameplay boundaries to accommodate the improved visibility for out of bounds map areas and details. As a result, the layout of sector designations may have changed on certain maps from their previous layout. For example, C3 on Mining Collective is now D4.
• Gridlines, sector designations, and player torso cone are now slightly more transparent.
• Command icons have been resized to match the size of 'Mech icons on which they are placed.
• Leg orientation of Enemy 'Mechs will now be displayed when they are in range of a UAV or when they are Tagged. These directional indicators snap along the 8 cardinal directions. 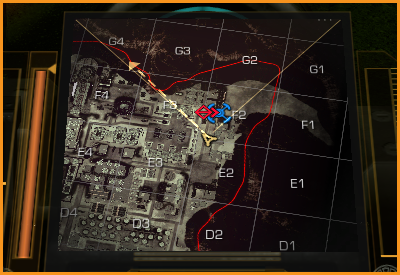 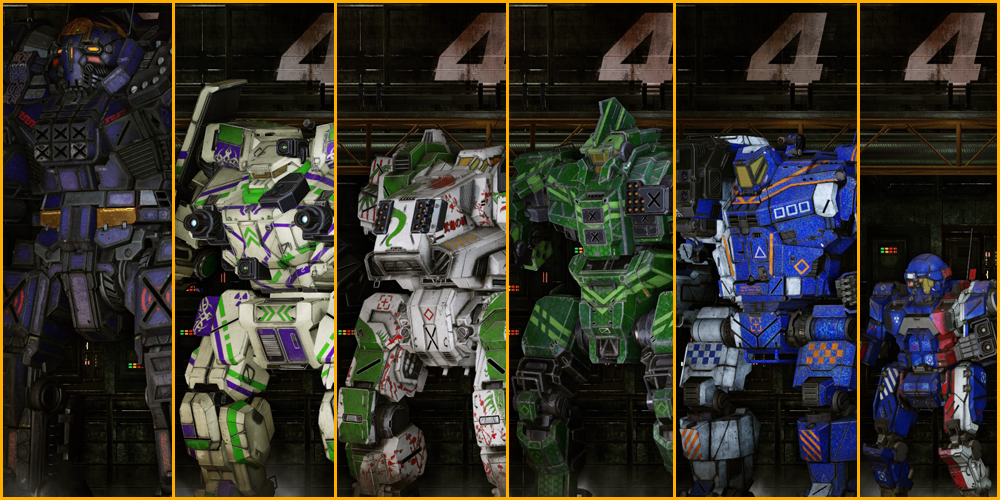 How to use these patch files

• Download the above file(s)
• For sake of ease we recommend creating a dedicated folder for the patch file(s), such as 'MWO Patch Cache'
• You do not need to unzip or unpack the patch file(s)
• Launch the standard MWO launcher
• Click the gear icon in the top right of the launcher window
• Choose the 'Specify Patch File Cache' option
• In the field that appears, paste or enter the location in which you saved the patch file(s) and hit OK
• For example, C:\Users\<username>\Documents\MWO Patch Cache
• Click the blue Patch button
• The launcher will now check the Patch Cache folder you defined. If it locates the required patch files, it will unpack and use those files to apply the patch.
• Once the patch is complete, launch the game!