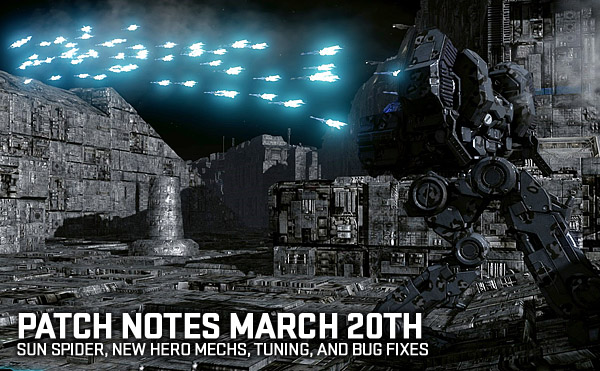 Tuesday, March 20th 2018 @ 10AM – 1PM PST
Patch Number: 1.4.157.0
Patch Size: 230 MB
Please note that due to compression differences the Steam patch size may be larger than the standalone client patch size.
Greetings MechWarriors!
Piranha Game's second original 'Mech, the Sun Spider is here! Those who participated in December's big giveaway event last year, look out! Because you will receive the new original Hero 'Mechs this patch!
We've got some Faction Play changes, as well as 'Mech Quirks, Weapon tuning, including some changes to the Air Strike Consumables, many bug fixes and lastly some improvements to the Special Events system!

Store Page
You can check out the Countdown post for more details about the Sun Spider as they are released! 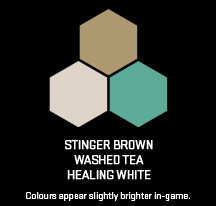 The holiday bonus event Hero Mech's have been released to the players who have participated in the event on December 27th 2017 and now have received the following two new Hero Mechs:
• Roughneck Powerhouse RGH-PH 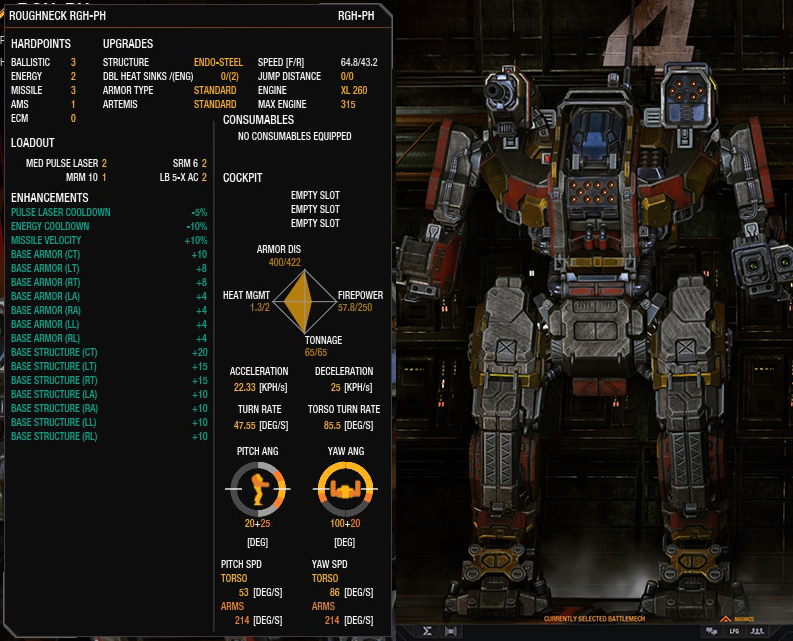 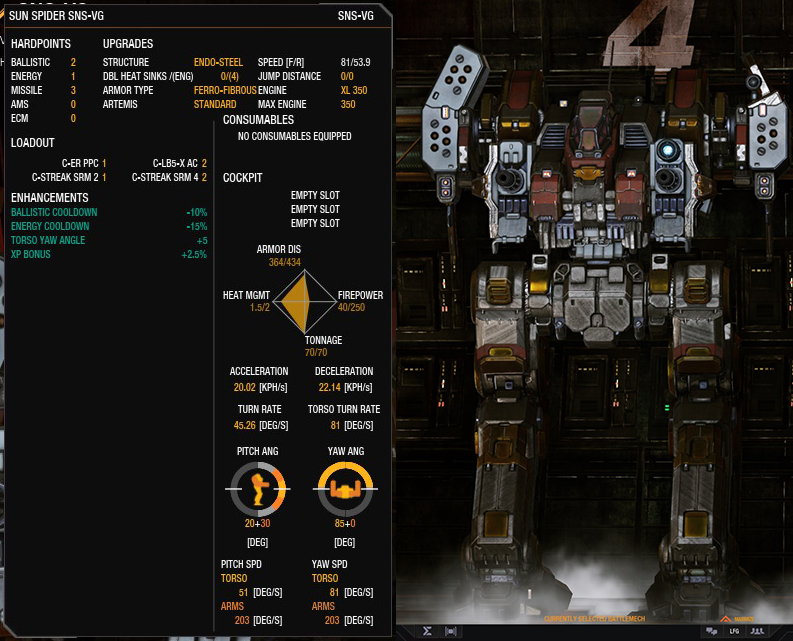 Check if you were a December 27th Holiday Event Participant for the eligibility to receive these Heroes here!

Skill Tree changes:
Re-spec/re-equip costs have been removed from Skill Trees.
Changes to Mech Quirks:
Griffin:
- The Sparky has received a light mobility increase
- Energy Heat Gen and Energy Cooldown have been rolled over into universal quirks of the same value.  Although this will not result in any change in performance, its intention is to consolidate the listed quirks so that when combined with skills unlocked through the skill tree, the total bonus value is displayed as a singular entry as opposed to two separate entries.
- Has received a moderate mobility increase
- Existing Missile Cooldown -10% and Energy Cooldown -5% values have been consolidated into a Universal Cooldown -5%
- Has received a new Universal Range +10% quirk
- Has received a new Missile Velocity +10% quirk
- Has received a moderate mobility increase
- Energy Range 10% quirk converted into a Universal Range +10% quirk
Griffin Design notes: We wanted to provide a light boost to some of the under-performing Griffin Variants to better align them against their alternative variants.
Highlander:
- Mobility has been Lightly increased, Deceleration more then many other attributes

Highlander Design notes: We wanted to nudge the Highlander's mobility values up slightly with a heavier benefit to its decel rate to help its baseline responsiveness.
Banshee:
- Ballistic cooldown increased to -15% (from -10%)
- Missile cooldown increased to -15% (from -10%)
- Has received a new Weapon Heat Gen -10% quirk
- Has received new Armor quirks across front torso, arms, and leg locations.

- Inner Sphere SRM/2
Heat reduced to 1.7 (from 2)
Equipment Changes
- Clan Double Heatsinks:
Health reduced to 4 (from 5)
Clan Double Heat Sink Design Notes: Due to the reduced Critical locations on Clan Double Heatsinks, we have seen a heavy amount of loadouts in the heavy and assault class' lean on heatsink boating as an easy way to supplement the heavy amount of firepower that the Clans can often acquire for minimal tonnage through certain weapon selections.  We do not wish to separate the capabilities of heat sinks to the detriment of those clan 'Mechs that occupy the lighter half of their roster which are often restricted more by Tonnage, and not critical space, or those loadouts that rely on heavier payloads such as ballistic or missile weapons.  But we do want to target a change that provides heatsink boating loadouts with a bit more natural give and take by making mass heatsink stacking more venerable to attrition through critical hits.
Consumable Changes

- Coolshot 18 (Both c-bill and MC versions of the consumables):
"Coolshot 18" name changed to "Coolshot"
Base Cooling reduced to 14 (from 18)
Final Cooling after all Coolshot skill tree skills taken: 18.2 (from 23.4)
Coolshot Design notes: We feel that the total power gained from coolshots for the amount of skill nodes invested was skewing a bit too high considering the point investment needed to fully unlock.  We are reducing the baseline amount to bring the overall coolshot consumable into better alignment with the point investment you spend on upgrading the consumable.
- Airstrike (Both c-bill and MC versions of the consumables):
Number of shells per strike reduced to 6 (from 10)
Duration reduced to 0.6 (from 1)
Lateral Bomb radius increased to 10. (from 7.5) 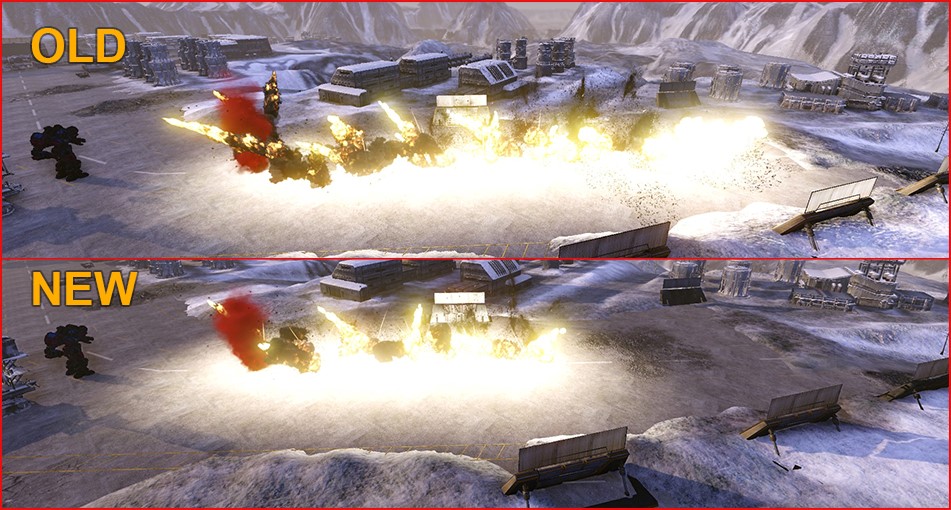 Airstrike Design notes:  When it came to the two types of strike options available, Airstrikes tended to overshadow Artillery strikes due to their ability to accurately arc over cover and deliver their entire payload across a full cluster of Enemy 'Mechs.  While arcing over cover and punishing 'Mechs camped immediately behind cover is the cornerstone of the Airstrikes role, its ability to both be buried well out of sight of an opposing force while still being able to successfully hit targets hundreds of meters outside the initial engagement zone is something we wish to curb.
We are going to remove some of its shells and distance to make the consumable focused on breaking targets immediately behind cover. These changes will keep Airstrikes potent against opponents that are hiding immediately behind cover, but will remove the ability for the bombs to carry through to targets hundreds of meters away form the initial bombing area unless the smoke can be successfully placed closer to the initial target.