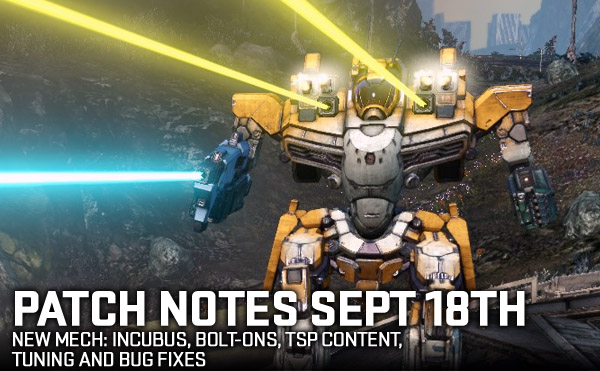 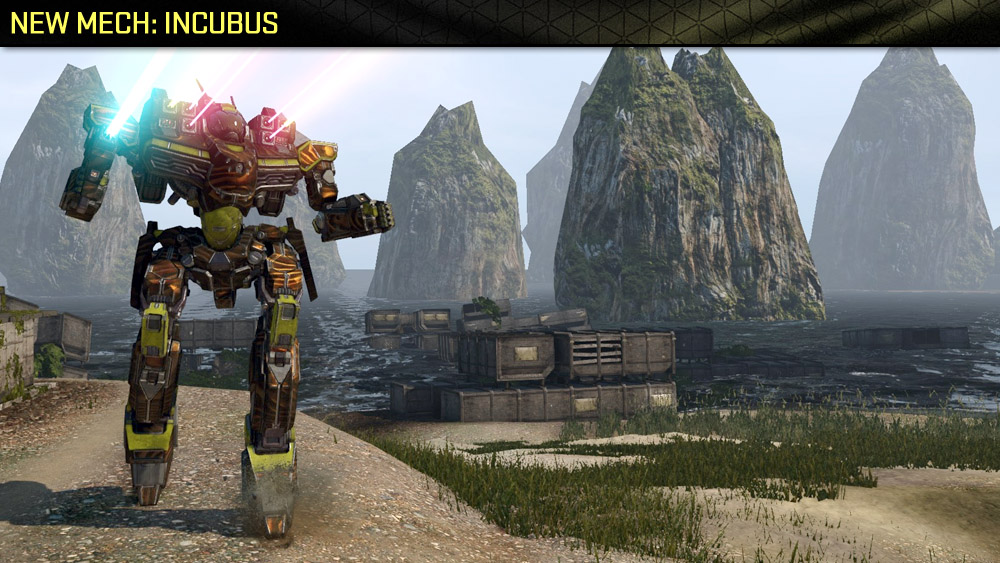 You can check out the Countdown post for more details about the Incubus as they are released!
Order the Incubus in the Store page here!

New Bolt-On added to all retrofitted 'Mech chassis:
The following 'Mech Chassis have been retrofitted for Bolt-on support:

In Tournament related news, all Comp Play team rosters will be officially locked on September 18th Tuesday at Midnight (PDT), after which the top 12 ranked teams in the Comp Play Leaderboard will continue on to the MWO World Championship 2018 Semi Finals!

The top 12 teams will be playing their matches using MWOWC 2018 Tournament Client, which will become available to them after September 18th midnight cut-off. Team captains will be contacted regarding the Semi Finals match scheduling.
Also, the legendary duo BanditB17 and mdmzero0 will be reprising their roles as Shoutcasters on twitch.tv/PiranhaGames during the duration of the MWOWC Semi Finals from September 22nd to October 6th. The Live Streams schedule will be announced in news post while also linked on the Competitive Play sub-forums once determined.

Current issue:
Vulcan 'Mech:
Max armor on all Vulcan variants has been corrected to LT: 40 and RA: 24. Any 'Mech with armor assigned higher then these values will be rendered invalid until the armor complies with their intended max values.  Reducing the armor by 2 on the Left torso's for non-hero variants, and reducing both the LT and RA armor by 2 on the hero variants will clear the invalid tag.

Art Fixes:
Patch Files (Direct Download)
To make the patching process easier for players with limited download caps, we'll be providing direct download links for the patch file(s) that comprise this patch. This will allow you to download the patch file(s) elsewhere, for manual injection into the MWO patcher through a Patch Cache folder.
Aside from allowing you to download the patch file(s) elsewhere, on another connection, there are no additional benefits to performing the patch this way; the patching process itself will be the same.
This direct patch download process will only work for players running the standalone client. It does not apply to players running MWO through Steam.
Patch File(s): To be provided on patch day
How to use these patch files
• Download the above file(s)
• For sake of ease we recommend creating a dedicated folder for the patch file(s), such as 'MWO Patch Cache'
• You do not need to unzip or unpack the patch file(s)
• Launch the MWO Portal
• Select the three horizontal lines in the top left of the Portal Window
• Choose the 'Specify Patch File Cache' option
• In the field that appears, paste or enter the location in which you saved the patch file(s) and hit OK
• For example, C:\Users\<username>\Documents\MWO Patch Cache
• Click the blue Patch button
• The launcher will now check the Patch Cache folder you defined. If it locates the required patch files, it will unpack and use those files to apply the patch.
• Once the patch is complete, launch the game