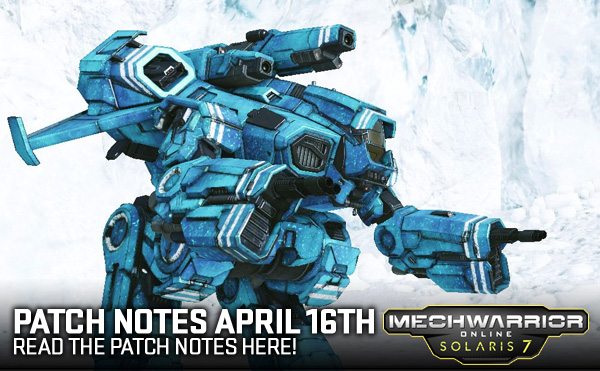 New 'Mech: Marauder II
You can check out the Countdown post for more details about the Marauder II 'Mech as they are released!
Order them in the Store page here!

Hibernal Rift has been added to Skirmish, Assault, Conquest and Domination game modes as well as Training Grounds.

Hibernal Rift is the winter version of the existing Canyon Network map. This alternate version is more than a visual change though. There are new visible pathways to the upper deck areas near the center and there are a few more blocker areas and assets to make the gameplay unique to this map compared to the original Canyon Network.
Check out this preview of it below:
NGNG High Res Preview

Solaris Season 5 Reset
Leaderboards have been reset for a brand new Season.
Update to 'Mech Variants assigned Solaris Divisions (Check out the new 'Mech Division here!)
Solaris Seeding Match Changes:
- Seeding match SSR multiplier reduced by 57%
Solaris Season 4 Rewards:
To qualify for the prizes, players must have played a minimum of 25 matches in the given Solaris 7 Divisions. Note that these rewards do STACK if you participated in multiple Divisions.

Weapon Changes
Missile Health adjustments:
After observing the recent changes to missile systems introduced in the March Patch, we have found that the Missile health tuning implemented from the tested PTS values overshot our stated goals for the AMS system when it came to the live game. Even with the additional AMS quirk scale down from high performers.  Because of this, the April patch will bring further refinement to missile health values:
LRMs (Both Inner Sphere and Clan)
SRMs (Both Inner Sphere and Clan)
Streak SRMs (Both Inner Sphere and Clan)
MRMs
ATMs
Design Notes:  We want to stress that although we are showing the exact values changes coming with this patch, viewing the Missile Health values in isolation does not portray an accurate picture of how this affects the relationship to missiles and AMS in-game. A 25% health boost to missile health does not translate to exactly 25% less missiles being shot down by AMS systems.
The reason for this is because missile health is a single component of a much larger AMS system that feeds into the final effectiveness of AMS.  So while the health values of an MRM might be substantially less than other missiles, due to higher projectile speed, and denser amount of physical missiles in the volley, the net effectiveness of these systems in-game are not something that can easily be reflected by looking at just the health values.  As Volley size, Missile Velocity, and travel time within AMS’ effect range play equally large rolls in the final results of AMS’ effectiveness in-match.
‘Mech Quirks
Thanatos
TNS-HA:
Corsair:
COR-7R
Design Notes: We wanted to create a number of Rocket Launcher Flavor quirks to coincide with the COR-7R and to provide it to other heavy Rocket Launcher ‘Mechs like the Thanatos Hangover.  Unfortunately, these new quirk types did not make the cutoff for the Corsair release and so we had to hold off on providing these particular flavor quirks assignments till this month.
Hellfire:
HLF-1
HLF-2
HLF-A
HLF-B
HLF-C
HLF-VO
Design notes: We are slightly increasing both its offensive quirks, as well as providing some lighter defensive quirks to give it a bit more general flexibility.
Quirk Changes PDF

Cadet status improvements:
Additional fixes and improvements:
Patch Files (Direct Download)
To make the patching process easier for players with limited download caps, we'll be providing direct download links for the patch file(s) that comprise this patch. This will allow you to download the patch file(s) elsewhere, for manual injection into the MWO patcher through a Patch Cache folder.
Aside from allowing you to download the patch file(s) elsewhere, on another connection, there are no additional benefits to performing the patch this way; the patching process itself will be the same.
This direct patch download process will only work for players running the standalone client. It does not apply to players running MWO through Steam.
Patch File(s): http://patcher.mwomercs.com/patch/Production/frontend/FrontendPatch_357.zip
How to use these patch files
• Download the above file(s)
• For sake of ease we recommend creating a dedicated folder for the patch file(s), such as 'MWO Patch Cache'
• You do not need to unzip or unpack the patch file(s)
• Launch the MWO Portal
• Select the three horizontal lines in the top left of the Portal Window
• Choose the 'Specify Patch File Cache' option
• In the field that appears, paste or enter the location in which you saved the patch file(s) and hit OK
• For example, C:\Users\<username>\Documents\MWO Patch Cache
• Click the blue Patch button
• The launcher will now check the Patch Cache folder you defined. If it locates the required patch files, it will unpack and use those files to apply the patch.
• Once the patch is complete, launch the game