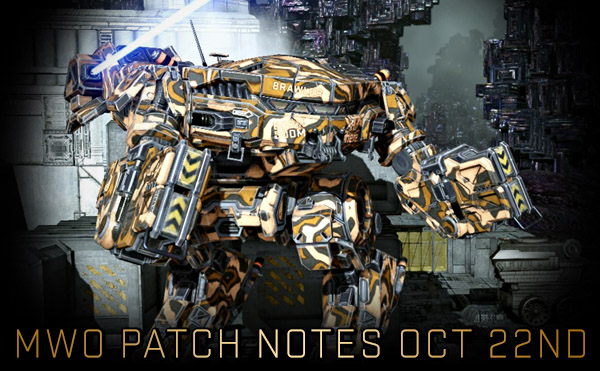 New 'Mech Variants
Standard Versions of MW5 Pre-Order Pack 'Mech Variants:
The following new 'Mech variants will be available in the Gift Store on patch day! These variants are standard versions of the MW5 Pre-Order Pack variants launched earlier this year. Details can be found here: https://mwomercs.com/news/2019/03/2255-mw5-community-preorder-bonus-mwo-mech-loadouts
These 'Mech variants will also be available for MC on Nov 5th and available for C-Bills on Dec 3rd.

Bolt-ons have been expanded to the following 'Mech variants:

Faction Hero Rewards for Loyalist Players:
Faction Play End of Round Rewards:
Faction Play Leaderboards:
End of Competitive Play Season
All rosters and leaderboards will be locked after Saturday, October 19th and the Comp Play tab will become inaccessible on patch day. Those wishing to view the leaderboard data can do so on the website (2019 Comp Play leaderboard Archives here). Stay tuned for a follow up announcement summarizing the comp play rankings and the next steps to the community run championship tournament.

Solaris Season 7 Reset
Leaderboards have been reset for a brand new Season.
Solaris Divisions have been updated in regard to 'Mech variant selection. (New division list here)
Solaris Season 6 Rewards
To qualify for the prizes, players must have played a minimum of 25 matches in the given Solaris 7 Divisions. Note that these rewards do STACK if you participated in multiple Divisions.