MechWarrior 5: Mercenaries in the PC Gaming Show at E3! 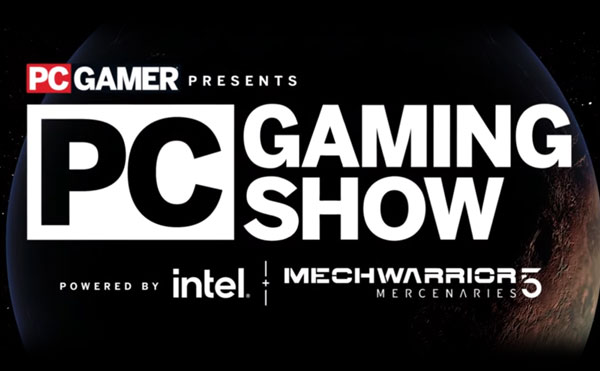 Broadcasting from Los Angeles during the E3 weekend on twitch.tv/pcgamer, youtube.com/pcgamer, and featured prominently within E3’s official programming and Twitch Gaming’s Hottest Games of Summer lineup, the PC Gaming Show will reveal 39 new trailers, game announcements, and interviews to audiences around the world.
Building on the show’s independent 2020 presentation that drew 5.9M viewers, this year's broadcast will combine professionally-produced video packages with live, energetic commentary, broadcasting from the official E3 stage in Los Angeles as well as the aforementioned spaceship.
The 2021 PC Gaming Show is presented by Intel and MechWarrior 5: Mercenaries, partners with a longstanding legacy in PC gaming. This year's sci-fi theme celebrates the rich history and future of these two partners, a company and franchise that have defined the spirit of PC gaming.
As part of both E3 and Hottest Games of Summer, the show can be streamed on a record number of services, including Twitch, YouTube, Facebook, Twitter, Steam, TikTok, VENN, Reddit, Entertainment Weekly, and international partners such as WEBEDIA, Wechat, Bilibili, and AfreecaTV. PC Gamer will be working with both the ESA and Twitch to promote the show through prominent co-streamers.