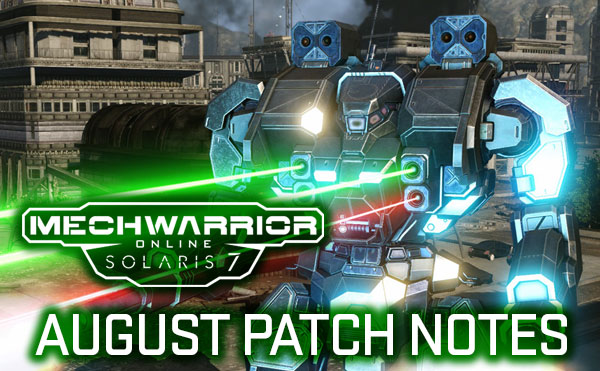 August 2022 Patch Notes
Patch Date and Time - August 23rd 2022 @ 10AM – 1PM PDT
Version Number: 1.4.266.0
Size: 291 MB
Please note that due to compression differences the Steam patch size may be larger than the standalone client patch size.
Patch Files (Direct Download) - http://patcher.mwomercs.com/patch/Production/frontend/FrontendPatch_406.zip
Greetings MechWarriors!
This month we have the new Platinum Collection 06 'Mechs, including the Warhammer, Marauder, Rifleman, Archer, Warhammer IIC, Marauder IIC, Rifleman IIC, and Mad Dog! Be sure to watch out for the next Platinum Collection Event to follow! Also included in this patch are another round of 'Mech Quirk Adjustments, Weapon Adjustments, Gameplay Tweaks, and Bug Fixes!

These updates are subject to further balance changes in the future, so get out there and do the science, and get us your feedback for future iterations.
And now, we really hope you enjoy the patch!
-The MechWarrior Online Team