Upcoming Patch - Tuesday, April 18th @ 10AM – 1PM PDT
Patch Number: 1.4.111
Standalone Client Patch Size: ~600 MB
Steam Client Patch Size: TBA
Please note that due to compression differences the Steam patch size may be larger than the standalone client patch size.
Quick Links
Incursion Game Mode
Roughneck
New Items, Titles, Badges, and Decals
Gameplay
Floating Chat
Other Fixes and Changes
New Loading Screens
Patch Files (Direct Download)
Greetings MechWarriors,
The Roughneck has arrived, and is now en-route to the MechBays of eligible MechWarriors. Pulled from the ranks of Achernar IndustrialMech designs and retrofitted for a combat role at the height of the Clan Invasion, the Roughneck is an example of desperate ingenuity in the face of a devastating opponent. The Roughneck is the first 'Mech designed from the ground-up by Piranha Games and Alex Iglesias; we hope you dig this brand new addition to the family of 'Mechs in the BattleTech and MechWarrior franchise.
The all-new Incursion Game Mode has arrived! To secure victory players must ensure the integrity of their Team Base, contending for essential Fuel Cell Supply Points to power key Support Towers for use in the fight against the Enemy forces and their Base.
The chat system is receiving an upgrade in this patch with the introduction of a new 'floating' chat system. This will enable you to continue chatting with friends and unit-mates across the majority of main menu systems.
This patch features a number of Gameplay tweaks and adjustments, including the addition of sector designations for commands issued from the Command Wheel and BattleGrid, adjustments to certain Match Score contributors, improvements to the Domination Game Mode for Alpine Peaks, and more.
Rounding out the patch we have a handful of 'Mech fixes, all-new Loading Screens, new Colours, and additional items.
Read on for all the details for the April patch, and we'll see you on the battlefield!
- The MechWarrior Team

Welcome to the Incursion, MechWarriors.
To secure victory players in the Incursion Game Mode pilots must ensure the integrity of their Team Base, contending for essential Fuel Cell Supply Points to power key Support Towers for use in the fight against the Enemy forces and their Base.

River City Base West
Each Team controls one Base on either side of the map. Each Base contains the following elements:
• 4 Destructible Mobile Field Bases
• 3 Base Towers and associated Destructible Tower Generators

• Destructible Base Walls
• Destructible Base Turrets
The Mobile Field Bases and Base Tower Generators contribute to the overall health of the Base. Destroying or damaging any of those Base elements will reduce the overall health of the Enemy base and bring your Team closer to victory. To damage or destroy an Enemy Base Tower you must fire directly upon the associated Generator; the Towers themselves do not take damage.
Base Walls do not count toward the health of the Base, but destroying them can provide your forces with a new vector of attack. Base Turrets also do not count toward the health of the Base.
At the start of an Incursion Match all Base Towers are inoperable. Players must locate Fuel Cell Supply Points on the map, retrieve their Fuel Cells, and return them to a Base Tower for installation into the associated Generator. 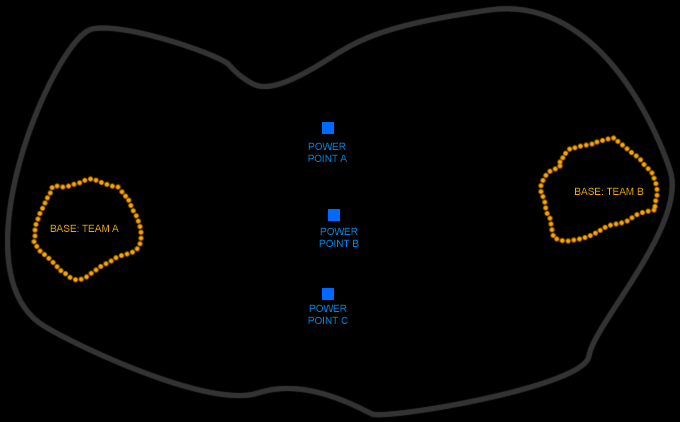 A fully-charged Fuel Cell awaiting retrieval from a Supply Point

Fuel Cell has been retrieved; a new Cell is being fabricated and charged
Each Fuel Cell Supply Point requires 2 minutes to charge a Fuel Cell. Once a Fuel Cell has been fully charged the Supply Point will make the Cell accessible for retrieval. Fuel Cells do not deplete while they are still in the Supply Points.
Once a Fuel Cell is retrieved the Supply Point will reactivate and begin charging a new Fuel Cell.
To retrieve a charged Fuel Cell from a Supply Point a ‘Mech must stand within 5 meters of the Supply Point. Retrieval time is 3 seconds.
If two friendly ‘Mechs are both within retrieval range the Fuel Cell will be received by the most recent player to have entered range.
Fuel Cells cannot be retrieved if an Enemy ‘Mech is also within range. Destroying the Enemy ‘Mech in such a scenario will trigger the start of the standard 3s retrieval time.
Fuel Cells do not deplete when they are retrieved from the Supply Points and being carried by a 'Mech. They will only deplete after being installed into a Base Tower Generator.
A ‘Mech can only carry 1 Fuel Cell at a time, and Fuel Cells cannot be transferred between ‘Mechs. If a ‘Mech carrying a Fuel Cell is destroyed, the Fuel Cell is destroyed with it.
Friendly and Enemy 'Mechs will display an associated icon in the standard targeting information while holding a Fuel Cell. When carrying a Cell you will also see the associated icon in your HUD.

To install a Fuel Cell into a Base Tower the ‘Mech must stand within 5 meters of the Base Tower Generator, visible in the image below. Installation time is 3 seconds.
Once installed a Fuel Cell will immediately start providing the Base Tower with 2 minutes of power.
When a Base Tower is being powered your HUD will update to indicate the duration of power remaining. Enemy Towers do not convey this information; they simply convey whether a Tower is ON, OFF, or DESTROYED.
After 2 minutes the Fuel Cell will be depleted and consumed, rendering the Base Tower inactive until re-powered with another Fuel Cell.
Once consumed a Fuel Cell is considered destroyed and does not need to be returned to the original Supply Point. Each Fuel Cell Supply Point acts as its own fabrication unit, creating and charging new Fuel Cells.
Base Towers themselves cannot be damaged. To inflict damage against a Tower you must fire upon the Base Tower Generator.

Radar Tower
When powered, the Radar Tower conducts a full radar sweep of the battlefield, displaying Enemy positions for a duration of 5 seconds. This sweep re-occurs every 25 seconds for as long as the Radar Tower has power (2 minutes per Fuel Cell).
Radar sweeps will not detect ‘Mechs under protection from ECM.

Jamming Tower
When powered, the Jamming Tower will issue a jamming signal extending outward from the Base, limited to a distance of a couple hundred meters from the Fuel Cell Supply Points. This Jamming Signal will counteract Enemy radar and targeting systems.
This Jamming signal is perpetually active for as long as the Tower has power (2 minutes per Fuel Cell). 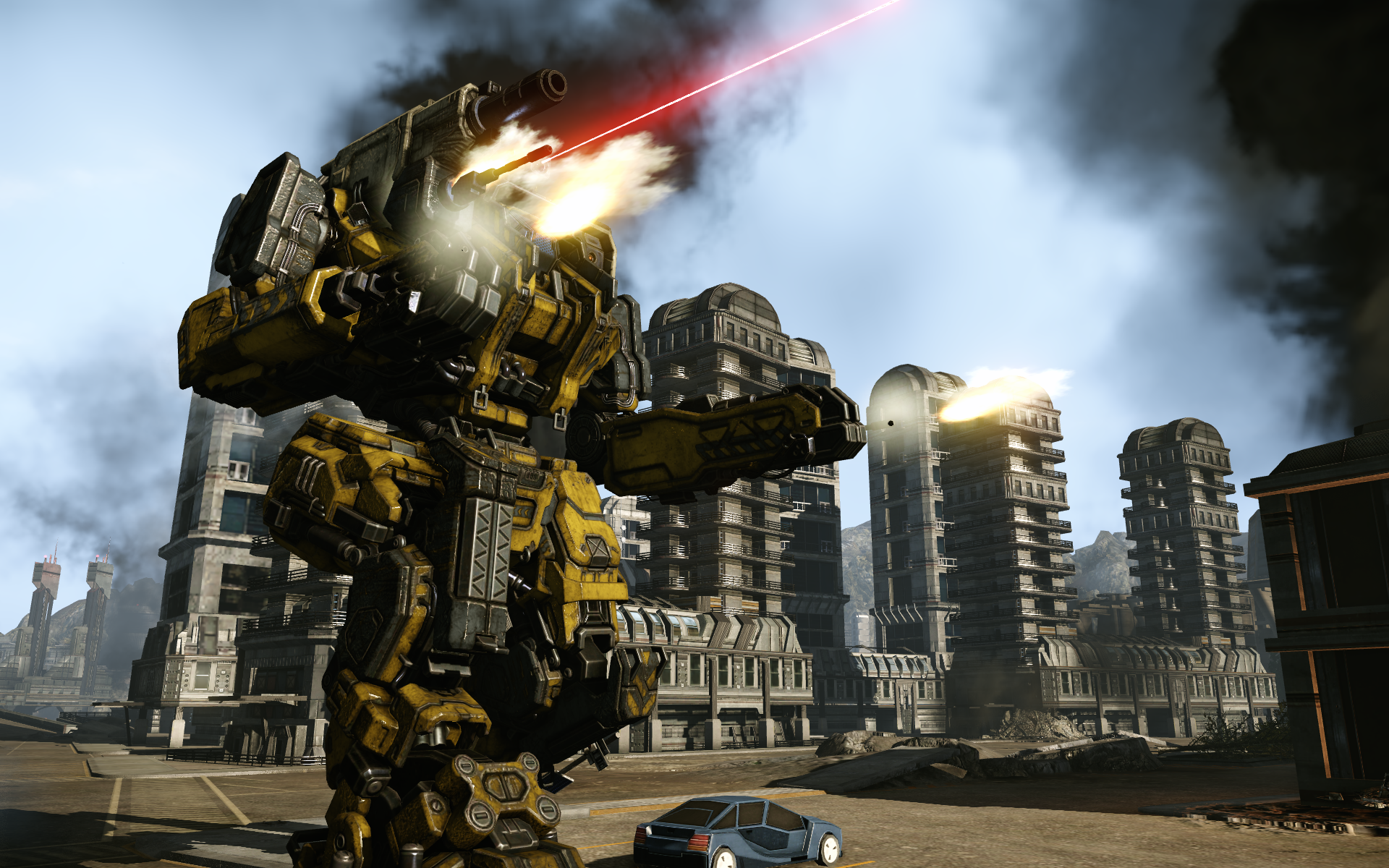 Roughneck (Heavy)
Store Page
Following the massive success of the Powerman-class LoaderMechs released by Sitwell Corporation beginning in the twenty-ninth century, other corporations began to take notice of a potentially lucrative market.
While Achernar BattleMechs is most known for its BattleMechs it also manufactures several IndustrialMechs, including the Dig King and Loader King.
The Clan Invasion forced BattleMech facilities across the Inner Sphere to ramp up production levels to previously unseen levels. For Achernar BattleMechs this included their standard line of Locusts, Enforcers, Dervishes, and so on. However, one lead designer had a wild idea: start with the Loader King - a superb design known for taking a beating and still delivering decade after decade - then overhaul the appropriate parts with BattleMech-grade components. While many balked at the radical idea, the designer saw the program through and the Roughneck was born.

As the first Roughneck to hit experimental production the RGH-1A was a surprisingly low-tech design on paper, mounting only a Small Laser, AC/10, SRM 4, and Machine Guns; its only nod to modern technological developments was the inclusion of CASE. The design nonetheless showed considerable promise after initial field-testing, and Achernar moved ahead with full production, even expanding its line of variants. By focusing on a cheap, sturdy, and easily-produced design, Achernar made the Roughneck an ideal choice for militias and down-on-their-luck mercenary outfits.
However, Achernar also took advantage of more advanced technologies to build a Roughneck destined for the Class Six arenas of Solaris VI. The RGH-R 'Reaver' design mounts an XL Engine, Endo-Steel Structure, and Double Heat Sinks, allowing the the sixty-five-ton machine to mount paired Ultra AC/5s, Large and Medium Lasers, along with a Streak SRM 2.
Release Date for MC: July 4th 2017
Release Date for C-Bills: August 8th 2017

• Hazard Yellow
• Reaver Red
• Oil Slick Grey
The Roughneck Quirks will be provided as part of the ongoing Roughneck Countdown!

Along with their complementary delivery to eligible Roughneck owners, the following Cockpit Items are also now available for purchase in-game:

"The Roughneck"
These Titles and Badges are only available through their associated Roughneck Pack. The Collector Pack comes with both.

Only two new Decals are arriving in this patch, releasing as part of the arrival of the Roughneck.
• Hard Hat and Tools
• Skull with Wings 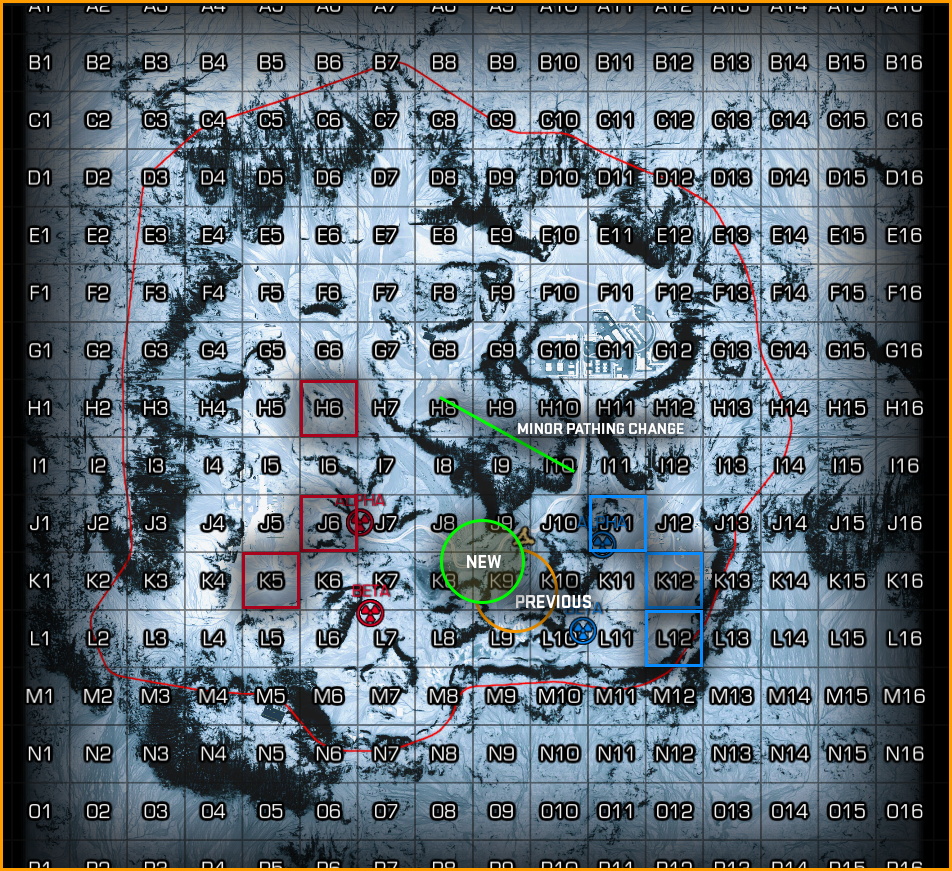 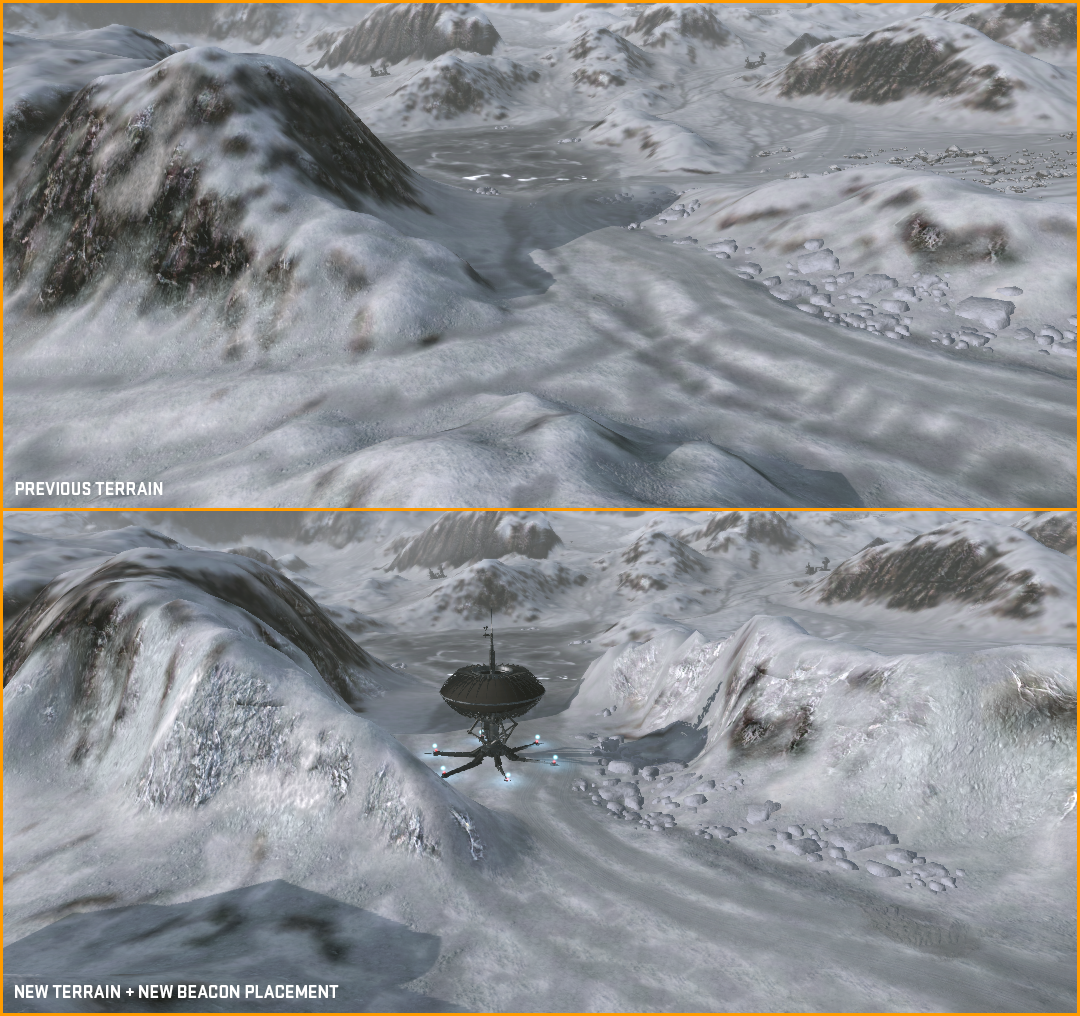 This patch features the release of a floating chat system persistently available through the majority of frontend menu systems. To bring up the floating chat window simply click the new Chat icon located in the social toolbar, placed next to the existing LFG button. You can also access the chat system through a new 'Open Chat' button accessible from the Friends window.

The floating chat window will enable you to maintain Chat with Friends, Unit and Group members, fellow Officers, and Faction allies in the majority of menu systems. This window will remain open even when the Social/Friends windows are inactive, and can be toggled active or inactive from eligible areas of the menu systems by clicking the same Chat icon mentioned above. As with existing Chat windows the floating chat window can be relocated and resized to accommodate the presence of other menu items.
Additionally, Chat tabs can now be reorganized by clicking-and-dragging a tab to your desired order in the tab list.
Clicking the plus icon in the tab list will bring up your Friends list for quick-access to initiating chat with an online player.
If you do not wish to receive Chat Notifications you can set an associated toggle for the feature through your Settings menu. When Chat Notifications are inactive the Chat button and tabs will no longer flash to indicate when a new message has been received.

New Loading Screens have been added in this patch for all Game Modes and Maps, featuring a more streamlined design and additional points of information for the associated Game Mode. 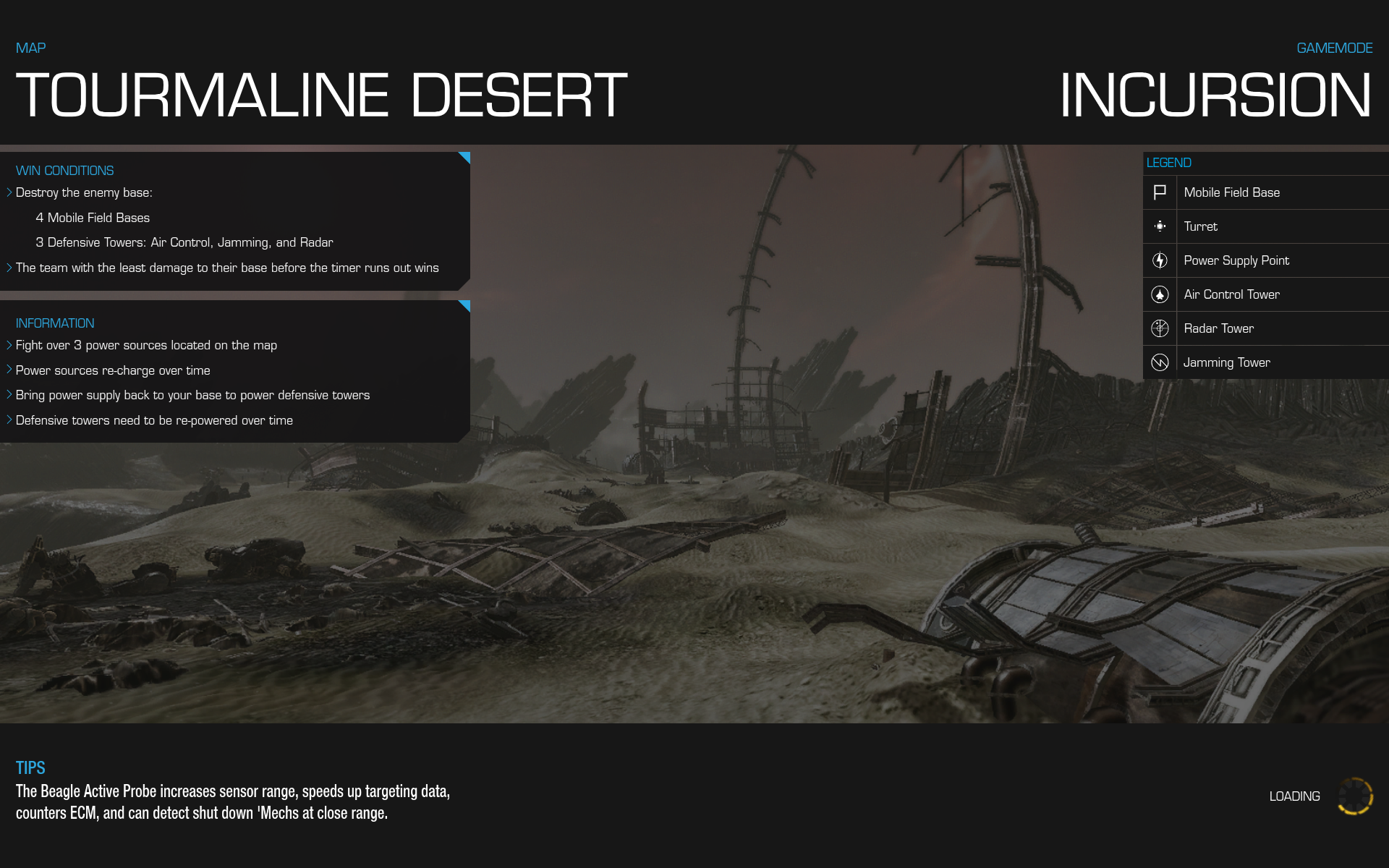 Patch Files (Direct Download)
To make the patching process easier for players with limited download caps, we'll be providing direct download links for the patch file(s) that comprise this patch. This will allow you to download the patch file(s) elsewhere, for manual injection into the MWO patcher through a Patch Cache folder.
Aside from allowing you to download the patch file(s) elsewhere, on another connection, there are no additional benefits to performing the patch this way; the patching process itself will be the same.
This direct patch download process will only work for players running the standalone client. It does not apply to players running MWO through Steam.
Patch File(s): http://patcher.mwomercs.com/patch/Production/frontend/FrontendPatch_297.zip
How to use these patch files
• Download the above file(s)
• For sake of ease we recommend creating a dedicated folder for the patch file(s), such as 'MWO Patch Cache'
• You do not need to unzip or unpack the patch file(s)
• Launch the standard MWO launcher
• Click the gear icon in the top right of the launcher window
• Choose the 'Specify Patch File Cache' option
• In the field that appears, paste or enter the location in which you saved the patch file(s) and hit OK
• For example, C:\Users\<username>\Documents\MWO Patch Cache
• Click the blue Patch button
• The launcher will now check the Patch Cache folder you defined. If it locates the required patch files, it will unpack and use those files to apply the patch.
• Once the patch is complete, launch the game