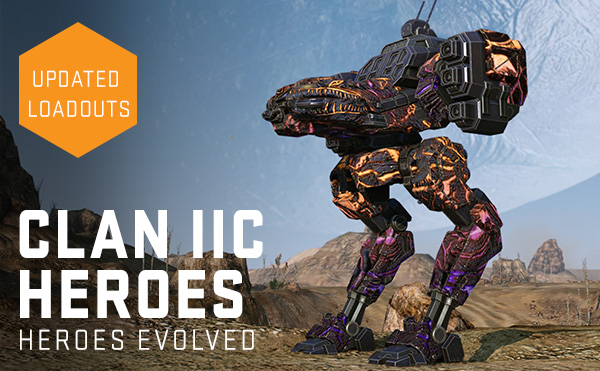 Greetings MechWarriors,
Since the launch of our Clan IIC Hero 'Mech pre-order we've received a lot of feedback regarding both the Loadouts for these 'Mechs and the use of placeholder renders for the pre-order page, demonstrating Hardpoints and Loadouts not representative of the final Hero designs.
As indicated by the disclaimer text located in the content summary section for each of these 'Mechs, the artwork used for these pre-order pages typically don't reflect the final Loadout and Hardpoint distribution; this is because the modelling and retrofitting work for these 'Mechs are usually not completed at the time the pre-order page goes up.
However, in the case of these Clan IIC Hero 'Mechs we leaned a little too heavily into 'rule of cool' territory with the Loadout and Hardpoint states we chose to display in the pre-order images. Not only did the pre-order render art for these 'Mechs demonstrate Hardpoints and Loadouts that weren't reflective of the Loadout and Hardpoint distributions of these Hero 'Mechs upon their final release (as is standard), but further demonstrated Loadouts which cannot exist at all according to the capabilities of these 'Mechs.
As a result, we have replaced the pre-order render images for these 'Mechs to simply reflect the Loadouts of their existing IIC counterparts. While these new images do not reflect the final Loadouts for these Heroes, they are at least more accurate to the capabilities of existing variants for these chassis.
Beyond the images used for the pre-order page, we also received feedback regarding the perceived viability and merits of the Hero Loadouts themselves. As a result of this feedback we are making some minor improvements to the Jenner IIC and Orion IIC Hero 'Mechs. Those changes are outlined below, along with some insight into why the Hunchback IIC and Highlander IIC Hero Loadouts are remaining as-is.
Jenner IIC JR7-IIC-FY "Fury"
Although the original design for this Hero variant already had more weapon Hardpoints than any of the other Jenner IIC variants, the reality was that most of them could only be practically utilized by equipping a combination of Machine Guns. In order to give the Hero a bit more versatility and punch, we have decided to add a second Energy Hardpoint to the Center Torso.
Orion IIC ON1-IIC-SK "Sköll"
For the Orion IIC Hero, we determined that it was under-gunned in comparison to the other variants. To address this, while we're still keeping with a design inspired by Kerensky's Orion, we've added an additional Energy Hardpoint to the Right Arm. Though the Hero is one Hardpoint short compared to the other ON1-IIC variants, we feel the inclusion of MASC is a decent trade-off.
Hunchback IIC HBK-IIC-DW "Deathwish"
We have decided to keep this design as-is. Although the Hero lacks Jump Jets, it does possess an Energy and a Ballistic Hardpoint, both mounted very high. This allows it to peak only the slightest amount of its head and shoulders over a hill before being able to fire a mix of large Ballistic and Energy weapons. Providing this Hero with Jump Jets would make it the clearly optimal choice if you're looking at running any HBK-IIC variant.
Highlander IIC HGN-IIC-KP "Keeper"
We have decided to keep this design as-is. The Highlander Hero is comparable to the other HGN-IIC variants, yet still brings something new to the table.
While the above changes to the Jenner IIC and Orion IIC represent buffs to their original Loadouts, if you've already purchased the Jenner IIC or Orion IIC Hero 'Mechs and wish to request a refund due to the above changes, please contact us at billing@mwomercs.com and our Support staff will be happy to process your refund as soon as possible.