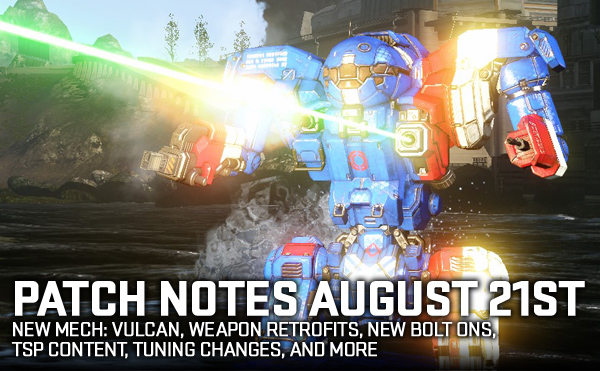 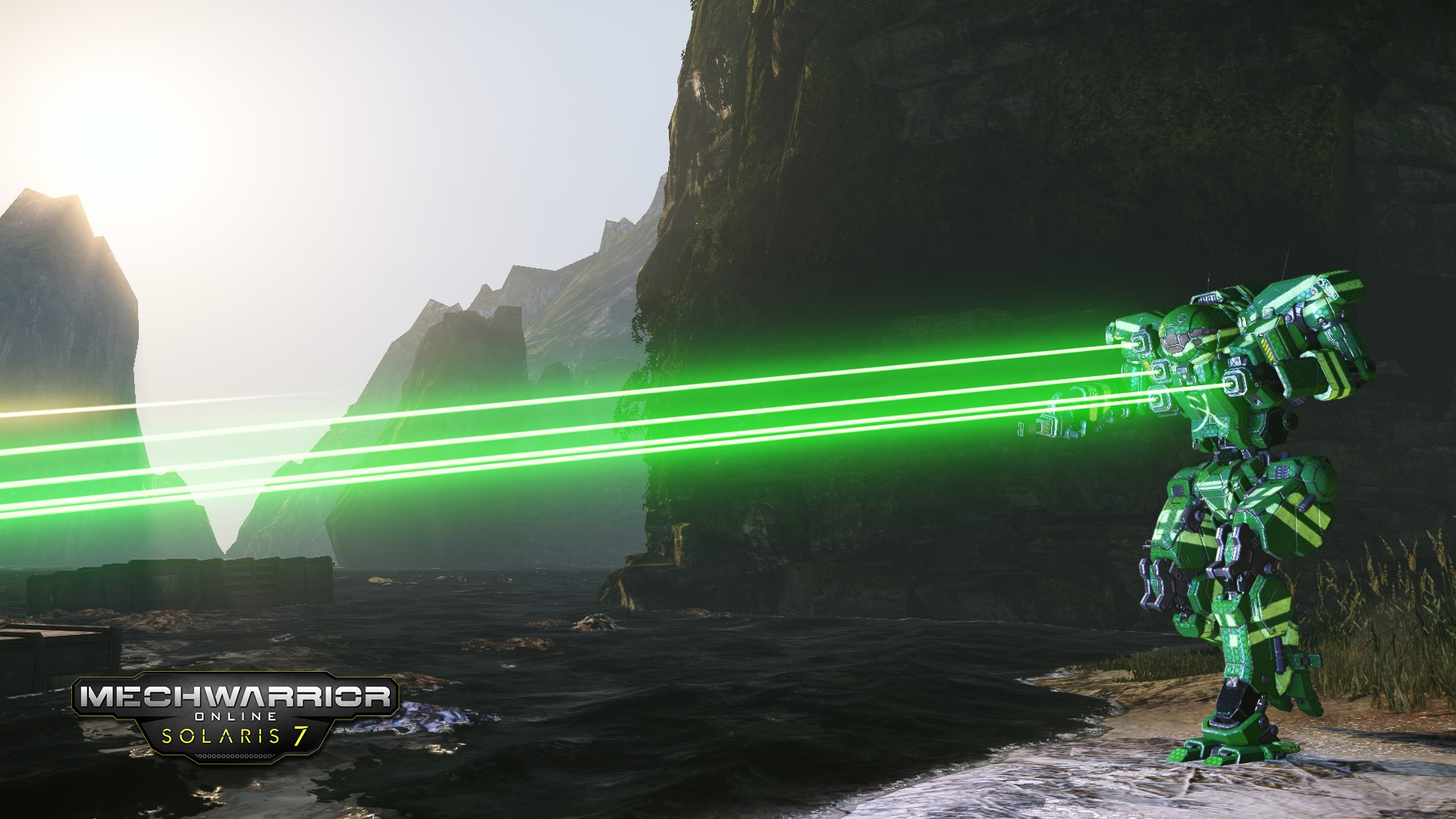 VULCAN
You can check out the Countdown post for more details about the Vulcan as they are released!

Order the Vulcan in the Store page here!

As of this patch, all variants of the following 'Mech chassis now support the distinct visuals of 3060s era weaponry:

New Bolt-Ons
The following new bolt-ons have been added to all retrofitted 'Mech chassis:
Bolt-On Retrofits
The following 'Mechs now have Bolt-On Support:
Battery Cell Bolt-Ons (shoulder and forearm) have been added to the following 'Mechs
Notes:
The bolt-ons are independent of the loadouts of the mech they are equipped to, therefore if there is a hardpoint for any weapon/ams/lms present on a variant that clips with a bolt-on, then we are unable to equip that bolt-on regardless of whether there is any equipment in that hardpoint.
On top of normal hardpoints, Omni-mechs present a similar problem in that we are unable to change bolt-on compatibility based on the Omni-pods present on the mech. There is also a toggle for the  arm-actuator (preventing any hand bolt-ons from being equipped), so Omni-mechs are generally more restricted in which bolt-ons are equitable.

Coolshots
Design notes:  Compared to ballistic and most missile heat which often is applied in rapid spikes, lasers and volley type weapons see heat applied over their duration.  This has allowed coolshots to be utilized either preemptively right before you fire your weapons, immediately after a shot in order to avoid shutdowns or overrides that would normally apply to weapons with heat that apply in a single heat spike, or in reaction to an override to immediately get yourself out of an overridden state.  We feel that in addition to having more immediate value to certain weapon types over others, this also creates situations in which coolshots ended up being used as a reactionary ability to negate any punishments for poor heat management.  With this pass, we are tuning the initial 3 seconds to still allow the total coolshot heat dissipation to apply between most weapon's cooldown cycles provided the player uses it as a proactive way to set up a future weapon volley.
LRMs
The past few months have brought with them a number of changes to the LRM system.  As we have stated in a recent podcast as well as the follow up forum thread, these changes have been implemented to make LRMs more effective at the core role we wish to see them occupy within the game.  While this did improve the base weapon as we wished to see, we also observed is that in its elevated baseline state, a number of force multipliers surrounding the LRM system compounded on one another to make the weapon system a bit too oppressive in certain situations.  In addition to a general ease of use that we felt needed tuning to be a bit more difficult to acquire and maintain targets. For this month, we will be hitting a number of force multipliers as well as provide a boost to ECM to help with coordinated counter-play against them. While we are focused on these force multipliers for this month, we still are closely observing LRM play and will consider further changes if we feel that it still does not put the weapon in a satisfactory state.
Weapon Lock changes 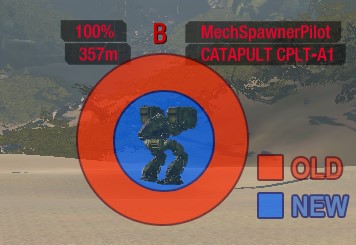 - Bushwacker - BSW-S2(C)
- Uziel - UZL-3P(C)
- Nightstar NSR-9P(C)
- Osiris OSR-1V(C)
- Roughneck RGH-1A(C)
- Mad Dog MDD-C(C)
- Assassin ASN-101(C)
Comp Play
After hearing the concerns about teams avoiding each other in the Comp Play queue, the following changes have been made to remove the ability to see what teams are in the active queue:
Trial 'Mechs Update
Inner Sphere:
Clan:
Art Fixes
Patch Files (Direct Download)
To make the patching process easier for players with limited download caps, we'll be providing direct download links for the patch file(s) that comprise this patch. This will allow you to download the patch file(s) elsewhere, for manual injection into the MWO patcher through a Patch Cache folder.
Aside from allowing you to download the patch file(s) elsewhere, on another connection, there are no additional benefits to performing the patch this way; the patching process itself will be the same.
This direct patch download process will only work for players running the standalone client. It does not apply to players running MWO through Steam.
Patch File(s):
http://patcher.mwomercs.com/patch/Production/frontend/FrontendPatch_342.zip

How to use these patch files
• Download the above file(s)
• For sake of ease we recommend creating a dedicated folder for the patch file(s), such as 'MWO Patch Cache'
• You do not need to unzip or unpack the patch file(s)
• Launch the MWO Portal
• Select the three horizontal lines in the top left of the Portal Window
• Choose the 'Specify Patch File Cache' option
• In the field that appears, paste or enter the location in which you saved the patch file(s) and hit OK
• For example, C:\Users\<username>\Documents\MWO Patch Cache
• Click the blue Patch button
• The launcher will now check the Patch Cache folder you defined. If it locates the required patch files, it will unpack and use those files to apply the patch.
• Once the patch is complete, launch the game