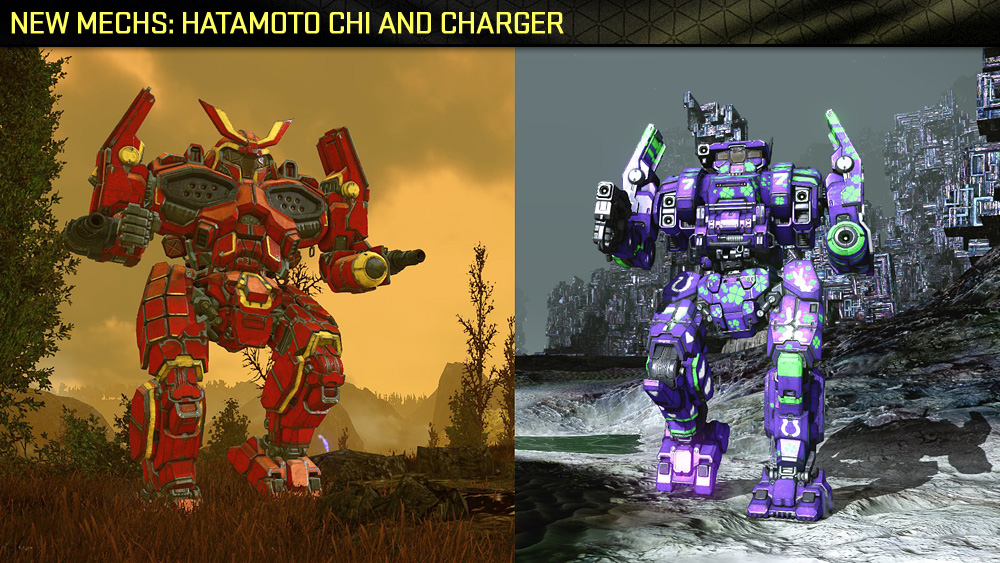 You can check out the Countdown post for more details about the Charger 'Mech and Hatamoto-Chi 'Mech as they are released!
Order them in the Store page here!

Some requested improvements have made it into Faction Play and the Friends List this patch:
Stay tuned in 2019 for more Faction Play improvements!
An update post from Paul Inouye has been posted on the forums regarding Faction Play status: https://mwomercs.com/forums/topic/270497-faction-play-update-post-mechcon-2018/

Heat System:
Heat System Design Notes:  We have decided to make some back end changes to the way the heat threshold system is calculated in order to address a number of heat related display bugs that resulted in irregular heat bar behavior when components where destroyed out from under a player while they still had accumulated heat.  While this change is mostly targeted to remove these heat display bugs, this will carry with it some shifts to the way that the heat system works.  Especially when it comes to 'Mechs that are redlining and have their components blown out from under them. We felt this change adds a slight bit more to the risk / reward factor for those that redline their 'Mechs close to the shutdown threshold, and is most apparent when a Clan XL or Inner Sphere Light side torso destruction penalty kicks in.
Stealth Armor:
Stealth Armor Design Notes: With the recent shift in heat systems that directly resulted in overall lower shutdown thresholds, we felt that these changes drastically impacted the way we wanted to see Stealth Armor utilized. Before, additional Heat Sinks added to Stealth Armor builds would gradually add larger amounts of threshold allowing for wider windows of operation before needing to disable the system.  With Threshold being greatly toned down at the Heat Sink level due to the recent heat system changes, most Stealth Armor builds were left in a situation where there was next to no way to gain additional operational time through higher threshold values.  Additionally, with dissipation being the larger focal point with the recent overhaul of the heat system, having Stealth Armor cut 100% of your dissipation resulted in additional Heat Sinks on Stealth Armor feeling like wasted tonnage since they now barely affected your window of operation, but magnified the drawbacks by cutting off larger amounts of dissipation.
To this end, we are shifting Stealth Armor away from utilizing a threshold window and will instead move it to a raw heat per second value that will eat into your per-second dissipation.  We hope to see this result in more varied load-outs outside of ballistics feel more rewarding to play with Stealth Armor. As well as have it be a bit more feasible to utilize on heavier 'Mechs.  While this will mean that you will be able to utilize Stealth Armor almost indefinitely on some builds that excelled at Stealth Armor before when a 'Mech is operating at full efficiency, we do have to highlight that when Heat Sinks or Light Engines get damaged / destroyed, there is now the potential that active Stealth Armor will result in you perpetually gaining heat in some instances if you do not have the engine / external Heat Sinks to cover the continuous 1.5 heat per second generation while the Stealth Armor is activated. Resulting in much more usability at peak efficiency, but with the potential to be a bit more detrimental depending on how your heat dissipation degrades through battle attrition.
Quirks:
Kintaro
Kintaro Design Notes: While the primary focus of this patch remains the mobility attributes, we wanted to provide a bit of a boost to the under utilized KTO-19 variant. This will be the only non-mobility quirk assignment this month.
This month's primary focus was to cut through as much of the backlog on the recent mobility passes on 'Mechs.  While there are a small amount of stragglers who have yet to receive mobility increases, this patch will bring the vast majority of 'Mechs into the spot we wish to target for mobility. The following chassis received updates to one or more of their variants with this pass:
Full Breakdown of the changes can be found in the following PDF:
https://static.mwomercs.com/downloads/2018_12_PatchQuirks(2).pdf