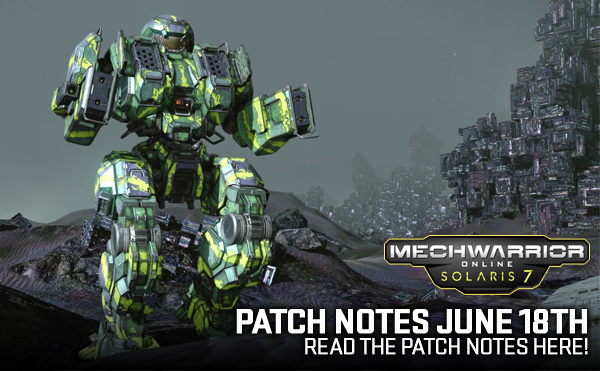 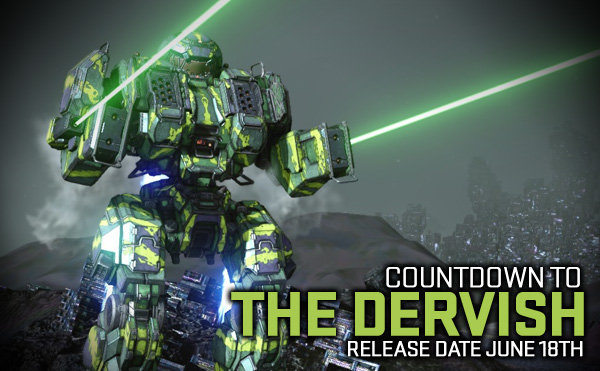 New 'Mech release: Dervish
You can check out the Countdown post for more details about the Dervish 'Mech as they are released!
Order them in the Store page here!

Ballistics:
LBX AC/2 (Both Clan and Inner Sphere)
LBX AC/5 (Both Clan and Inner Sphere)
LBX Design Notes:  While the shotgun like properties of LBX will always see it's effectiveness increased at closer ranges, the 2 and 5 class weapons are designed to be the ranged specialists of the LBX line. So while the spread is the intended drawback to a weapon that provides boosted damage to critical components and internal structure, and runs at cooler heat levels by design, we wanted to tighten the spread up a bit to slightly increase the pellet clustering while working at longer ranges for these particular weapon types.
Missile:
ATMs (All launchers.)
ATM Design Notes:  The core intent of the adaptation of the ATM weapon system in MWO is that it is a missile system designed to reward those that learn how to properly zone themselves from a target to maximize the various damage plateaus before the drop-offs. With the potent 3 damage per-missile zone being a "high risk / high reward" zone that rewards players who learn how to get close enough to hit the 3 damage plateau, but far enough that the opponent doesn't duck into your substantial minimum range.  While initially challenging to players upon initial release of the weapon, as the years have gone on, players have adapted to using the weapon to a point where we feel the initially released range brackets does not give us the intended "high risk" that coincides with the +50% per missile damage increase reward.  So we will be reducing both the "optimal" range that provides the full 3 damage and the falloff range from 3 damage to 2 damage by 25 meters to require a bit more necessity to zone your opponent to get the maximum damage payout. At this time we are fine with the potential 3 damage per missile damage output of these weapons, but we want this to be a reward that is a bit more challenging to get. While also really rewarding those more agile 'Mechs that learn how to zone their targets with the weapon system.
For the range bracket that constitutes the "ER Missile" type from the lore, We are boosting the damage by 20%. Because ATMs in MechWarrior Online are a composite of 3 different physical missile types from the lore, some attributes of the weapon have to be tuned to account for the other 2/3rds of the intended weapon properties.  We feel that ATMs intended vulnerability to AMS, overall velocity, and lower arcs of fire, while appropriate for the other 2/3rds of the damage brackets, have left the bracket intended to represent the "ER Missile" weapon type a little short-changed. So we want to provide a bit of a raw damage boost to the weapon to account for the other drawbacks at firing at extreme ranges to give a bit more utility to the final range bracket for the weapon.
'Mech Changes
Banshee:
BNC-3E
BNC-3M
BNC-3S
BNC-LM
BNC-SR
Banshee Design notes:  Non-3S Banshees are designed to be on the high-end of mobility for a 95 ton 'Mech.  At this point, we feel they could use a slight boost in this department as well as a small increase to their CT Armor Bonus to compensate for their fairly large CT hitboxes.
Atlas:
All Variants:
Atlas Design notes:  While raw HP points through generous Structure and Armor bonus' are the core pillar of the Altas' flavor, we feel that they could use a slight bit more agility to further define them against the more weapon oriented 100 tonners like the Annihilator and the Fafnir. With the Boars Head, in particular, has among the highest mobility of any 100 ton 'Mech.
Kodiak:
KDK-1:
KDK-2
KDK-4
KDK-5
KDK-SB
Kodiak Design notes:  While the Kodiak may have been known for its speed in the fiction, the reality is that most players customize away from its 400 engine in order to maximize on its large amount of hardpoints, most with tight clustering, and higher mounts in the case of torso hardpoints.  In the past, this has forced our hand at balancing the entirety of the KDK line around its offensive payload potential especially accounting for it's potential to boat large amounts of heatsinks and in the case of some individual variants, store most to the entirety of its payload in tightly clustered high mounted torso locations.
With the change to the heating system in addition to the reduction in frontloaded clan laser damage, certain Kodiak variants have slowly moved away from the central performance curve as the general meta itself has shifted away from high damage burst alpha and more towards sustained DPS.  This has allowed us to take a second look at the non-ballistic centered variants and make some adjustments to better the line based on the current state of the game meta and not so much the state it was in when the initial adjustments to the KDK were made.
Read the Quirk Documentation here!