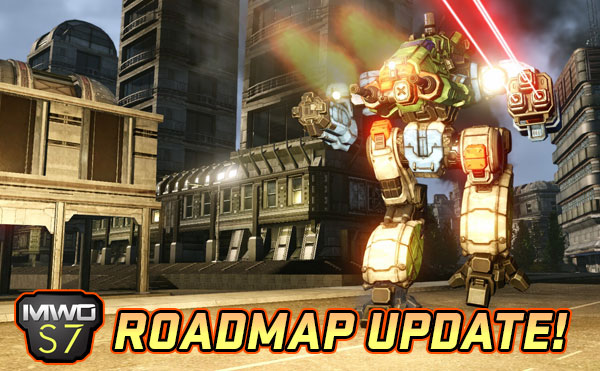 Greetings MechWarriors,
Well, this has been an exciting month for MechWarriors throughout the Inner Sphere! We were finally able to announce the news that the first new 'Mech chassis is being added to MWO since the Dervish was released almost 3 years ago! The Crusader has consistently been the most-requested 'Mech by our community for years, and our team is just as excited as you are to finally see it on the battlefield. Mark and Co. are busy making this iconic 'Mech a reality, and we've had a sneak peek at the cockpit and it will be one of the best yet! More info on the Crusader coming today with the launch of the pre-order, and we will be sure to ask Mark nicely if he can share some of that progress with everyone as he is able.
Francois is also busy working on the next map, a conversion of the Faction Play map Vitric Forge (with the big blue sun) into a new Quick Play map! With the success of this month's Emerald Vale release, we're really looking forward to another new map to add to our ever-growing collection. We will also ask Francois to share some of that progress with you as it becomes available.
Last but certainly not least, we also have quite a few development updates on the way. We'll cover those here with an update to the Road Map, but we will get into more detail on these exciting features in our upcoming Dev Vlog, which we will add to this post as soon as it goes live. In short, we're currently working on an update to the way Quirks are displayed in the MechLab (categories and color-coding), some improvements to the Skill Tree, and of course the new Event Queue Mode! We're also currently investigating improvements to the Matchmaker and Faction Play. Last but not least we are investigating the possibility of a new game mode for MechWarrior Online!
Check out the updates below, watch the Dev Vlog when it's out, and we'll see you out there MechWarriors!
-The MWO Team
SEE THE CHANGES ON THE ROADMAP HERE>>
or read
ROAD MAP UPDATES CONDENSED BELLOW
Mech Sections Update
Preorders
Next Platinum Collections
Map Section Updates
Next map

Features Update
*We will be revealing more about these feature updates in the upcoming DevLog and subsequent Feature Outline posts.
Feature Investigations

P.S.
This day and this Post have been something we have been working toward for quite some time! And here we are posting it the day before April Fools but rest assured this is NO JOKE!  The Piranha Games MechWarrior Team has been on a mission to deliver content and improvements that the fans want in both of our products.  The wheels have been in motion behind the scenes as we have prepared for this post!  Today marks the start of a new era for MWO, MW5, and MechWarrior. Thank you so much for all your support and patience we hope you enjoy the updates to the Roadmap.
Oh yeah, and there is still MORE STUFF COMING WE ARE NOT TALKING ABOUT! and we don't mean MW5 DLC 3!