UPDATED Regarding the new Mini Map

The Hot-Fix is arriving today, Wednesday June 22nd at 6PM PDT (June 23rd at 1AM UTC). Thank you for your patience!

EXPLAINING OUR APPROACH TO THE NEW MINI MAP

The addition of the Command Wheel in the June 21st patch required essential updates to the Mini Map and BattleGrid to support the new Commands. Part of the reason for the drastically zoomed out appearance of the new Mini Map was to help account for that array of new Commands,  and how we wanted them to be displayed: when a player was calling for Help with the new Command Wheel we wanted that alert to be visible to all teammates on the Mini Map itself, without a reliance on the Compass or BattleGrid.

The Mini Map was thus re-designed with those considerations in mind. It became abundantly clear once the patch was live however that too much of the redesigned Mini Map was in anticipation for features not yet implemented.

WHAT WE ARE DOING NOW TO FIX THE NEW MINI MAP

We are scheduling a hot-fix this week (exact ETA pending) with the following changes:

• The Player Torso Orientation Cone and Leg Orientation arrow are being restored. This is critical information to have, but was removed to account for the full-scale representation of the Map.

• The Mini Map will now again rotate with your ‘Mech, as it did with the previous Mini Map. It will no longer be locked in position, as it was with the initial June 21st patch.

• Rather than displaying the Map in its entirety, the Mini Map will now instead display a 2000m^2 area around your ‘Mech. This is a slightly larger area compared to the pre-patch Mini Map, which displayed an area of 1600m^2. To compensate for this larger size relative to the original, we have scaled down the size of ‘Mech, Command, and Capture/Control Markers in the new Mini Map to help prevent excessive overlap when in close quarters.

• In light of the above change to the Mini Map zoom we have restored the grid markers back onto the Mini Map itself; they are no longer placed on the border, as in the initial June 21st patch.

• With the placement of the grid markers back onto the Mini Map, we have slightly increased the size of the Mini Map UI element itself, to make use of that available space. 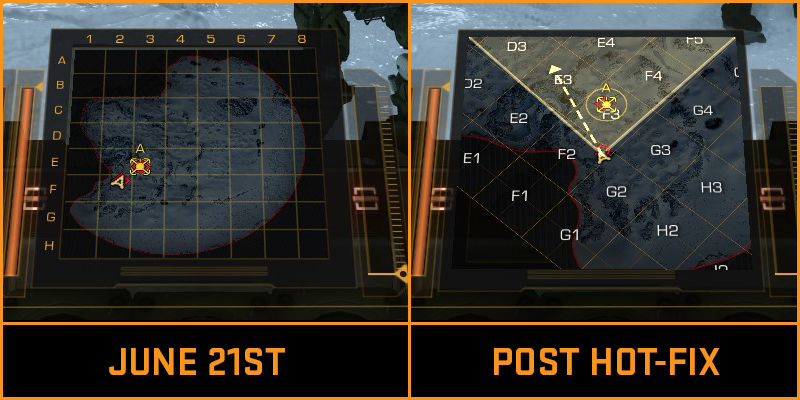 Our next steps, in a future patch, will be to implement the acquisition of Enemy ‘Mech Orientation Intel through the use of intel-gathering systems such as TAG and UAVs.
We will also be adding the ability to toggle the level of zoom on the Mini Map, between the 2000^2 scale and the full-Map scale seen in the initial June 21st patch. We still want players to be able to quickly glance at the battlefield as a whole, without needing to rely on the BattleGrid.

Beyond that, future patches will see additional refinements to InfoTech mechanics and how they can relate to the Mini Map. Certain ‘Mechs with specific capacities, such as the Atlas D-DC and its Command Console, will be able to convey their own Enemy ‘Mech Orientation Intel. In addition, allied ‘Mechs within range of the D-DC will be able inherit the properties of its Command Console and convey their own Enemy ‘Mech Orientation Intel to their teammates. Mechanics such as those are still in the design phase, but hopefully that sheds some light on the direction we are looking to take the Mini Map and its relation to InfoTech in the future.

Thank you for your feedback, MechWarriors.

We look forward to seeing you on the battlefield!