• Special Events Improvements
• New Cockpit Items
• New Tech Retrofits
• Other Fixes and Changes
• Patch Files (Direct Download)
Greetings MechWarriors,
The Civil War: Escalation 'Mechs have arrived, and are now en-route to the MechBays of eligible MechWarriors!
This patch contains a large number of gameplay-related fixes, adjustments, and improvements, including a Quirk pass on 9 'Mechs, balance adjustments for Medium-class Lasers, a fix for MRM firing rates, the restoration of persistent, friendly UAV markers, a number of community-requested feature improvements, and more.
The Special Events system is receiving a few key improvements in this patch, including the ability to toggle visibility of Faction Play Objectives for which you are specifically eligible, along with a potential fix for the issue that prevented the Event Browser from populating for certain players. If you continue to encounter this issue after applying the patch, please contact Support services at technical@mwomercs.com.
Rounding out the patch we have the release of three new Halloween Cockpit Items, the delivery of three additional Warhorns for WC 2017 Tournament Supporter Pack owners, and an array of miscellaneous improvements and fixes.
In other news, our three 2017 MechWarrior Online World Championship Finalists have been decided! The forces of EmpyreaL, EON Synergy, and 228th Black Watch will meet on-site and in person at Mech_Con 2017 on December 9th in Vancouver, BC to determine who among them will be crowned the 2017 MechWarrior Online World Champions. If you can't make it in person be sure to tune into the Mech_Con 2017 livestream to catch all the action!
One final note for this patch: due to the final-hour changes to the Nightstar arm orientation and the partial rollback of previously planned Laser changes, the expected downtime for this patch will run from 2 to 4 PM Pacific, rather than our usual time of 10AM. Apologies for any inconvenience!
In the meantime, read on for all the details of the October patch and we'll see you on the battlefield!
- The MechWarrior Team 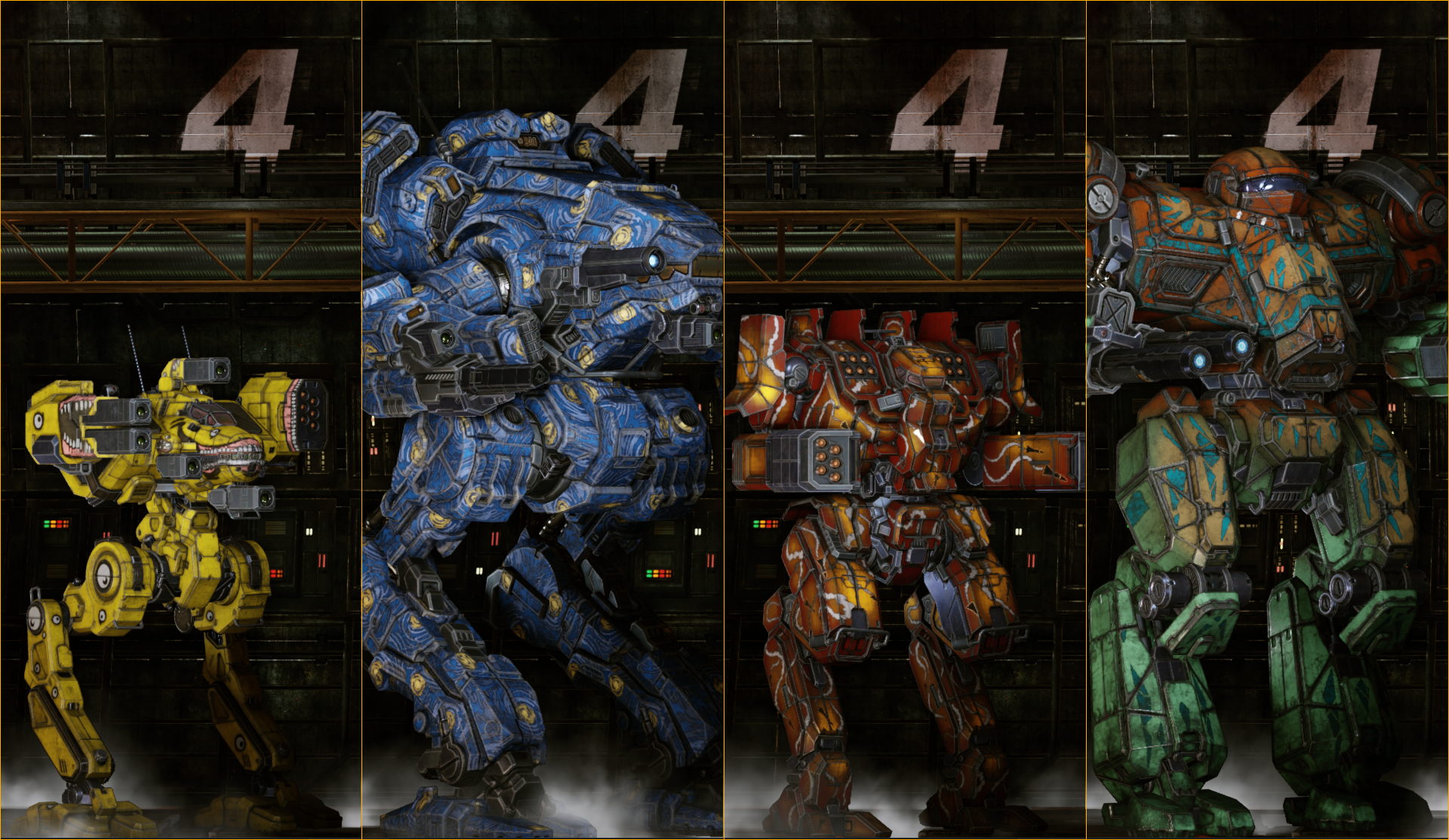 Nova Cat Release Dates
• MC Release Date: March 6th 2018
• C-Bill Release Date: April 3rd 2018
You can check out the Quirk information for all these new Escalation 'Mechs as part of our Countdown post here.
These new 'Mechs also bring with them a total of 12 new Colours for purchase with MC in-game. Early Adopters of an Escalation 'Mech Pack receive their associated colours for free.

Artemis Upgrade
• The Spread Bonus received from the Artemis Upgrade has been reduced.
Artemis Spread Design Notes: Post Skill Tree, the performance gulf between Artemis and non-Artemis based Missile systems has crossed a line; we now feel we need to reign in the inherent power of the Artemis system. With Artemis missiles being able to stack both the Artemis bonus and the Skill Tree bonuses, Artemis systems were too capable of reliably placing a majority of their total volley damage on a single Component. We are therefore reducing the bonus by an overall small amount to give Artemis systems fully augmented by the Spread Nodes a new maximum spread more equal to the previous inherent bonuses prior to the release of the Skill Tree.
Missile Lock
• The maximum angle at which Missile Lock can be retained after the reticle has drifted from the locked opponent has been reduced. Weapon Lock will now be lost at 25 degrees, instead of the previous 45 degree value.
Missile Lock Design Notes: This global change to the Missile Lock threshold has been implemented as a result of a number of balance issues that stemmed from its previous behavior.
• For LRMs, we want to increase the amount of focus needed to maintained sustained fire with the weapon.
• For Streak SRMs, we want to increase the difficulty of maintaining a weapons lock at close range, making it a bit easier for lighter, more mobile 'Mechs to break the lock.
• For ATMs, we want to greatly diminish the ability for 'Mechs to work around the shallow weapon arc by being able to 'curve' missiles around environmental obstructions while still maintaining their lock at close ranges, with minimal threat of return fire.
ATM 3 and ATM 6
• Spread increased to 3.2 (from 3).
ATM 9 and ATM 12
• Spread increased to 3.7 (from 3.5).
Missile Design Notes: ATMs are considered to have the Artemis Upgrade pre-attached to the weapon, and should function as such, but with the exception that their base level Spread is not augmented by Artemis (as it considered rolled into their baseline stats). As a result, we have increased its baseline Spread to correspond with the changes to the Artemis Upgrade described earlier in this section.

The original Patch Notes outlined a more far-reaching pass across the Laser-line of Energy Weaponry. However, based on player feedback we are limiting this balance pass to the Medium-line of Lasers only. You can check out a dev post here outlining the reasons for this change.
Medium Laser
• Cooldown increased to 3.5 (from 3).
ER Medium Laser
• Cooldown increased to 4 (from 3.35).
Clan ER Medium Laser
• Cooldown increased to 4.5 (from 3.75).
Clan Heavy Medium Laser
• Cooldown increased to 5.5 (from 5).
Energy Design Notes: At its core, customizing a 'Mech Loadout needs to provide a significant amount of give and take when it comes to deciding upon heavier payloads, thicker armor, faster speeds, and specialized equipment. We feel that the previous tuning on the Medium Laser family of weapons strained this balance by having a line of weapon options that easily maximized potential DPS for minimal Tonnage investments compared to alternative systems. This allowed 'Mechs to easily increase Engine and Heat Sink capacity in order to supplement the heavy DPS offered by amassing single-ton weapons, or supplement heavier weapons with Medium Lasers to maximize potential DPS to a degree much more significant than 'Mechs which either did not have sufficient number of Energy Hardpoints (or did not contain Energy Hardpoints at all).
While we are not looking to tune the overall damage output of these weapons at this time, we are looking to bring down the overall DPS that can be provided by the various Medium Lasers.

This months 'Mech balance pass includes a handful of mobility improvements for Light and Assault 'Mechs.
The original Patch Notes included Quirk changes for the GHR-5P and GHR-H 'Mechs. However, these changes were made as part of the previous, more comprehensive balance pass originally planned for Laser weaponry. With the rollback of those changes the two Grasshopper variants are no longer receiving a Quirk adjustment in this patch. You can check out our dev post regarding the Energy changes here.

Skill Tree
• Firepower: Bonus received from Velocity Nodes has been increased to 3% per-Node (from 2%).
Velocity Node Design Notes: After observing the pick-rate of the Velocity-based Skills we feel that their previously provided bonus was a bit low for the amount of Nodes required to maximize the Skill. As a result we are providing each Velocity Node with a 50% boost to its previous value, making the Velocity Nodes a more attractive option for investment with projectile-based Weaponry.
General
• Cool Shot: Fixed an issue where using the second Cool Shot before the first would cause the whole gauge to deplete and refill, rather than just one segment of it.
• Faction Play: Fixed an issue where allowing the death screen to time out on its own would prevent the the Drop Deck select screen from appearing, dropping you automatically in the next cycle with the next 'Mech in your list.
• Keybinds: The 'Show HUD' keymap toggle has been moved to F7.
• MRMs: MRM Rate of Fire is no longer limited by client framerate.
• Scoreboard: Restored a previously-reverted fix for 'Mechs with Throttle Decay active being forced to brake when accessing the Scoreboard.
• Stealth Armor: Sensor Sweeps, Sensor Towers, and Turrets no longer detect 'Mechs with Active Stealth Armor.
• Streak SRMs: Fixed an issue where Streaks would target destroyed Components.
• Target HUD: Hero 'Mechs now report their proper chassis name and ID in the Target HUD element, rather than the Hero name.
• Target Info HUD: The chassis name has been added to the Target Info HUD asset.
• Testing Grounds: Testing Grounds now supports the use of Freecam. This can be toggled with F5.
• UAV: Persistent markers for Friendly UAVs have been restored
• UI: Fixed an issue where reconnected players could still appear as 'No Name'.
• Uziel: Fixed an issue that would cause the Uziel CT to fire LRM10s in incorrect volleys.
• VoIP: A speaker icon now appears in the 'Mech info area when an allied 'Mech is speaking.

WC 2017 Green (Warhorn Cockpit Item): Not Purchasable
Audio
The WC 2017 Warhorns are not purchasable in-game, and can only be attained by purchasing the 2017 Tournament Supporter Pack.
Eligible Civil War Escalation owners also receive their associated XP/C-Bill boosting Cockpit Items in this patch; these items are not outlined here as they are the same as the items released in the July Patch.

8 new Decals are featured in this patch, all from the Civil War Escalation 'Mech Packs. While the Decal release in this patch is again quite light, additional Decal sets inspired by community requests will be released in future patches!
• Lyran Guards
• Lightning
• Phoenix
• Wolf Eye
• Cobra
• Medical Instruments
• Blood Kit
• Arctic Wolf Head

Aside from the Osiris, Nightstar, Arctic Wolf, and Nova Cat, no additional 'Mechs are receiving support for New Tech Visuals in this patch.