Tuesday, January 23rd 2018 @ 10AM – 1PM PDT
Patch Number: 1.4.148
Standalone Client Patch Size: ~173 MB
Steam Client Patch Size: ~310 MB
Please note that due to compression differences the Steam patch size may be larger than the standalone client patch size.
Quick Links
• Piranha
• Gameplay
• New Cockpit Items, Titles and Badges, and Decals
• Competitive Mode
• Other Fixes and Changes
• Patch Files (Direct Download)
Greetings MechWarriors, and Happy New Year!
The Piranha 'Mech has arrived, and is now en-route to the MechBays of eligible MechWarriors!
This patch sees a handful of gameplay-related adjustments, including Quirk changes for the Assassin and Shadow Hawk 'Mechs, improvements for the Light and Heavy Gauss Rifles, and more.
Rounding out the patch we have a number of fixes and improvements for maps, 'Mechs, and the frontend, the release of standard, purchasable versions of the 2017 Rewards Program Cockpit Items, the release of reward items for MWOWC Finalists, Qualifiers, and Participants, and more.
Read on for all the details, and we'll see you on the battlefield!
-The MechWarrior Team

Store Page
MC Release Date: June 5th 2018
C-Bill Release Date: July 3rd 2018
You can check out the Quirk information for the Piranha as part of our Countdown post here.
The Piranha also brings with it 3 new Colours for purchase with MC in-game. Early Adopters of a Piranha Pack receive these colours for free. 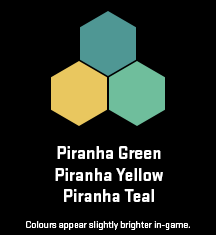 Heat Gen Nodes
IS and Clan Heat Gen Nodes now have separate values in the Firepower Tree.
Inner Sphere values remain unchanged.
• -0.75% per Node.
• -10.5% total.
Clan values have been adjusted to the following:
• -0.6% per Node (down from -0.75%).
• -8.4% total.
Heat Gen Design Notes: After reviewing the net benefit provided by the Heat Gen Nodes within the Firepower Tree, we have determined that the original values were providing inflated benefits on the Clan side compared to the benefits offered for IS 'Mechs. This change is therefore aimed at bringing the net benefits between the two factions closer in line, accounting for a typical Clan Loadout and a typical Inner Sphere Loadout.

Light Gauss Rifle
• Cooldown reduced to 2.6 (from 3.25).
• Heat reduced to 0.55 (from 1).
Light Gauss Rifle Design Notes: The Gauss Rifle family of weaponry is designed around high Damage for minimal Heat at relatively long ranges, with the Light Gauss' primary features revolving around its long range and its very fast projectile speed. With this patch, we have provided the Light Gauss with a moderate boost in overall DPS to provide it better value considering the weight of the weapon, without overlapping its role with similarly weighted weapons. We have also reduced its Heat. While this may seem superfluous given its already low Heat value, with the added DPS we found the weapon was causing just enough Heat to stall out of the dissipation of Heat reserves for weaponry paired with the Light Gauss. As minimal Heat is at the heart of its niche, this behavior was not providing us with the intended benefit of supporting supplemental weapons paired with this rifle, and therefore necessitated a reduction in its Heat.
Heavy Gauss Rifle
• Optimal Range increased to 220 (from 180).
Heavy Gauss Rifle Design Notes: This change is the result of direct feedback from 2017 MWOWC finalists, and is intended simply to push out the effective range of the Heavy Gauss Rifle.

Clan Medium Pulse Laser
• Max Range reduced to 480 (from 561).
Clan Medium Pulse Laser Design Notes: Due to the 50% extra Optimal Range over the IS Medium Pulse Laser, the Max Range of the Clan Medium Pulse Laser extended to a point where it was being utilized in ways that we felt made the weapon too much of a generalist compared to its IS counterpart. The Max Range has therefore been reduced to a point where there is much closer parity between the two weapons in terms of Max Range. However, the Clans will continue to possess superior Optimal Range and Damage.
Clan ER PPC
• Cooldown increased to 5 (from 4.5).
Clan ER PPC Design Notes: While we are satisfied with the ER PPCs effectiveness in ranged combat, this change is intended to provide a slightly longer window over which closer-ranged opponents can attempt to pressure Clan ER PPC carriers when they are caught out of position.

Only two 'Mechs are receiving Quirk adjustments in this patch. As a result, we have not provided the usual PDF document. The changes will simply be outlined here.
Assassin
• ASN-21 Armor Quirks have been converted into Structure Quirks.
Assassin Design Notes: The Assassin chassis as a whole has carried through a number of heavy Quirk benefits from its pre-Skill Tree state, and has slowly compounded on those changes as we continue to work toward improved baseline tech balance. While many variants of the Assassin have remained on-target, the ASN-21 has been consistently punching above its weight to the detriment of many 'Mechs that occupy a similar niche in other weight classes. While we're issuing only a minor change to its Quirks in this patch, we will consider further changes if the 'Mech continues to push out many other 'Mechs occupying similar, SRM-focused roles.
Shadow Hawk
• SHD-2D has received a -5% Missile Spread Quirk.
• SHD-2D now has a +10 Structure Bonus for the Left Arm and Right Arm (up from 5).
• SHD-2D has received a global -10% Weapon Cooldown Quirk.
With the addition of this global -10% Weapon Cooldown Quirk, the existing Cooldown Quirks have been removed or adjusted:

• -10% Energy Cooldown Quirk has been removed.

• -10% Ballistic Cooldown Quirk has been removed.

• -10% Energy Cooldown Quirk has been removed.

Standard Scottish Bagpipe Warhorn: 500 MC
The Top three Finalists of the 2017 MechWarrior Online World Championships are also receiving their Trophy and Medallion Cockpit Items in this patch. The Finalists will also be receiving special Warhorns and Decals in an upcoming patch!
Additionally, the Qualifying Teams are receiving their own special Trophy in this patch. The Qualifying Teams will also be receiving a special Decal in an upcoming patch!
And finally, all 2017 MWOWC Competitors are receiving a special Competitor Ribbon Cockpit Item in this patch.
These items are not purchasable.
First Place - EmpyreaL
Second Place - EON Synergy
Third Place - 228th Black Watch

With the conclusion of the 2017 MechWarrior Online World Championship season, the Competitive Mode has been disabled as of this patch until the official start of the 2018 season.
• The Comp Play button will no longer access the Comp Play interface; it will instead prompt the player with a dialog box informing them of the off-season state.
• Comp Play is no longer an eligible Group Type option in the Group management interface.
• Comp Play chat has been disabled.
Stay tuned for the launch of the 2018 MechWarrior Online World Championship Competitive Season later this year!

• Drop Preparation Screen: The orientation of the map in the drop preparation screen will now match the orientation of the map in the BattleGrid.
• ESC Menu: Fixed an issue where the Close button would no longer highlight when hovered.
• Faction Play: Fixed an issue where additional War History archive pages could not be accessed.
• Plasma Ball Cockpit Item: Fixed an issue where the electricity could be seen clipping outside the enclosure.
• Special Events Browser: Fixed an issue where Past Events were not displaying correctly.
• Hellbringer (Prime-I): Fixed an issue where Torso and Arms had no explosion effects when destroyed.
• Nova (NVA-BK): Fixed an issue where Missiles equipped in the Left Arm would not attach correctly.
• Nova Cat (all variants): Fixed an issue where certain Cockpit Items could partly obstruct the view outside the cockpit.
• Stalker (all variants): Fixed an issue with Weapon Door animations.
• Stormcrow (all variants): Fixed an issue where the player could see through the Left and Right Torso from inside the cockpit at high FOVs.
• Summoner: Fixed some material issues with UAC5s and UAC2s.
• Forest Colony (E4): Fixed an issue where DropShips could clip through the mountains in Incursion matches.
• Frozen City (Domination): Improved balance of spawn locations.
• Frozen City (Domination): Fixed an issue where Team A only Beta MFBs and Team B only had Alpha MFBs.
• Grim Portico (F6/F5): Fixed a floating light tower.
• River City (Domination): Improved balance of spawn locations.
• Rubellite Oasis: Fixed a number of collision issues, particularly in the central region.
• Rubellite Oasis (E7): Fixed an area where 'Mechs could get stuck.
Patch Files (Direct Download)
To make the patching process easier for players with limited download caps, we'll be providing direct download links for the patch file(s) that comprise this patch. This will allow you to download the patch file(s) elsewhere, for manual injection into the MWO patcher through a Patch Cache folder.
Aside from allowing you to download the patch file(s) elsewhere, on another connection, there are no additional benefits to performing the patch this way; the patching process itself will be the same.
This direct patch download process will only work for players running the standalone client. It does not apply to players running MWO through Steam.
Patch File(s): http://patcher.mwomercs.com/patch/Production/frontend/FrontendPatch_322.zip
How to use these patch files
• Download the above file(s)
• For sake of ease we recommend creating a dedicated folder for the patch file(s), such as 'MWO Patch Cache'
• You do not need to unzip or unpack the patch file(s)
• Launch the MWO Portal
• Select the three horizontal lines in the top left of the Portal Window
• Choose the 'Specify Patch File Cache' option
• In the field that appears, paste or enter the location in which you saved the patch file(s) and hit OK
• For example, C:\Users\<username>\Documents\MWO Patch Cache
• Click the blue Patch button
• The launcher will now check the Patch Cache folder you defined. If it locates the required patch files, it will unpack and use those files to apply the patch.
• Once the patch is complete, launch the game