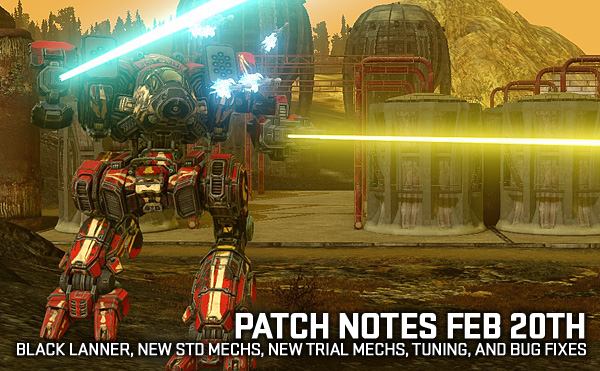 The Black Lanner is here! This is the second 55 Ton Clan 'Mech to join the game! It also gives players a second option when maxing out tonnage in Scouting mode which recently had its max tonnage raised from 50 to 55 tons. The Black Lanner content is also now available in-game.
The Standard versions of the Customer Rewards Program are coming to the Gift Store along with a refresh of the in-game Trial 'Mech selection. A new auto-ban system is in place to deter disruptive players and our latest tuning values to quirks, weapons, and skills. Finally some Bug Fixes and Improvements to round out this patch.
Look forward to seeing you on the battlefield!
-The MechWarrior Team 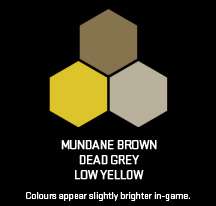 Standard Versions of 2017 Customer Rewards Program Variants in the gift store
Trial 'Mechs have been updated to the following Selection:
IS
Clan

All Rate of Heat Loss quirks have been replaced with "Heat Dissipation" quirks.

Final Values of the Rate of Heat Loss quirks have been normalized dependent on engine availability.

Rate of Heat Loss Design notes: It was brought to our attention that the previous "Rate of Heat Loss" quirk designed to offset the forced external heat sinks of lower engine capped 'Mechs was bugged and was not properly functioning.  We have decided to shift these quirks over to the functional "Heat Dissipation" quirk in order to provide the intended boost to 'Mechs with a sub 250 engine class cap,  while also consolidating the bonus into the same quirk provided by the skill tree. This means that the total bonus for both the native quirk plus skill tree investments is displayed as a singular value, and no longer tracking through two separate quirk entries.

As part of the shift from the non-functional "Rate of Heat Loss" to the functional "Heat Dissipation" enhancement, we have reviewed and normalized the enhancement to reach a common baseline dissipation rate for 'Mechs that are receiving this corrective enhancement.

- Increased the frequency of torso based locations being targeted by the streak missiles as opposed to arms and legs.

MRM Design notes: We feel that the combination of relative tonnage efficiency, natural heat, and ability to fire up to 60 damage volleys without penalty have skewed the 30's just a bit above the rest of the MRM line up.  We are providing it with a 5% increase in heat to provide it with a bit more give and take when compared to alternative MRM launcher types.

Patch Files (Direct Download)
To make the patching process easier for players with limited download caps, we'll be providing direct download links for the patch file(s) that comprise this patch. This will allow you to download the patch file(s) elsewhere, for manual injection into the MWO patcher through a Patch Cache folder.
Aside from allowing you to download the patch file(s) elsewhere, on another connection, there are no additional benefits to performing the patch this way; the patching process itself will be the same.
This direct patch download process will only work for players running the standalone client. It does not apply to players running MWO through Steam.
Patch File(s):  http://patcher.mwomercs.com/patch/Production/frontend/FrontendPatch_324.zip  (link will be active at Patch Day)
How to use these patch files
• Download the above file(s)
• For sake of ease we recommend creating a dedicated folder for the patch file(s), such as 'MWO Patch Cache'
• You do not need to unzip or unpack the patch file(s)
• Launch the MWO Portal
• Select the three horizontal lines in the top left of the Portal Window
• Choose the 'Specify Patch File Cache' option
• In the field that appears, paste or enter the location in which you saved the patch file(s) and hit OK
• For example, C:\Users\<username>\Documents\MWO Patch Cache
• Click the blue Patch button
• The launcher will now check the Patch Cache folder you defined. If it locates the required patch files, it will unpack and use those files to apply the patch.
• Once the patch is complete, launch the game