Who's a Good Boy? CORGI 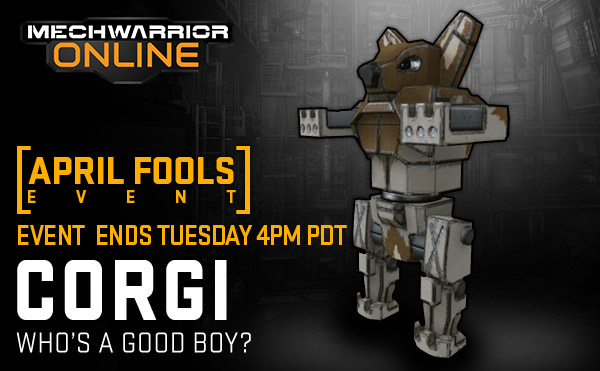 Who's a Good Boy?

The Sonic Cannon is a new weapon that will soon be added to MWO.  Unlike the weapons currently in the game, this will be the first one not to be based on a weapon from the existing BattleTech lore and canon.  It’s a non-canon cannon.  Due to concerns about a completely original weapon possibly being overpowered, it cannot be equipped like other weapons but will instead be integrated into certain 'Mechs in the same manner as the Cyclops’ Tacticon B-2000 Battle Computer.  The Sonic Cannon weighing 0 tons and it takes the place of one of the Life Support critical slots.  Due to its integrated nature it does not require a hardpoint.

The behavior of the Sonic Cannon is unique amongst the weapons in game.  When triggered, it fires out omnidirectional barks; sonic pulses that travel in all directions until they collide with something in the environment.  'Mechs hit by a bark will not take any damage but their pilots will become severely annoyed.

MechWarrior Pembroke:  As one of the youngest MechWarriors in Clan Spaniel, Pembroke has a reputation for being brash and scrappy.  Doing all she can to prove that she has what it takes to one day become Khan, she has taken to chasing after retreating Five Monkey 'Mechs during combat.  Using her Corgi’s advanced sensory equipment and sonic cannon, she herds the cowardly Five Monkey pilots back into the fight, to face combat like true warriors.  Her Corgi, Cardigan, has been highly modified.  She has even incorporated Five Monkey active probes into it, so as to make side by side comparisons to prove their inferiority to her superior Clan tech.  Her tactics have been noticed by the vile Five Monkey tribes, and she often finds herself being attacked by a swarm of their Fleas.