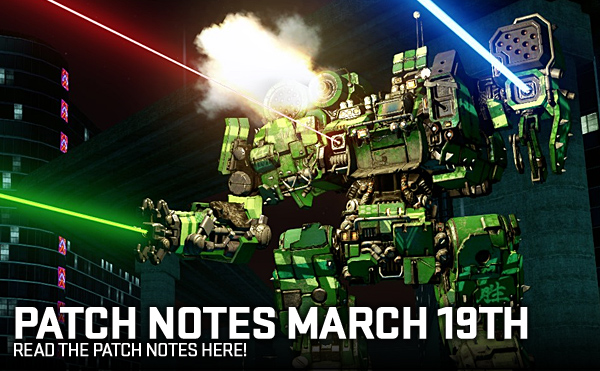 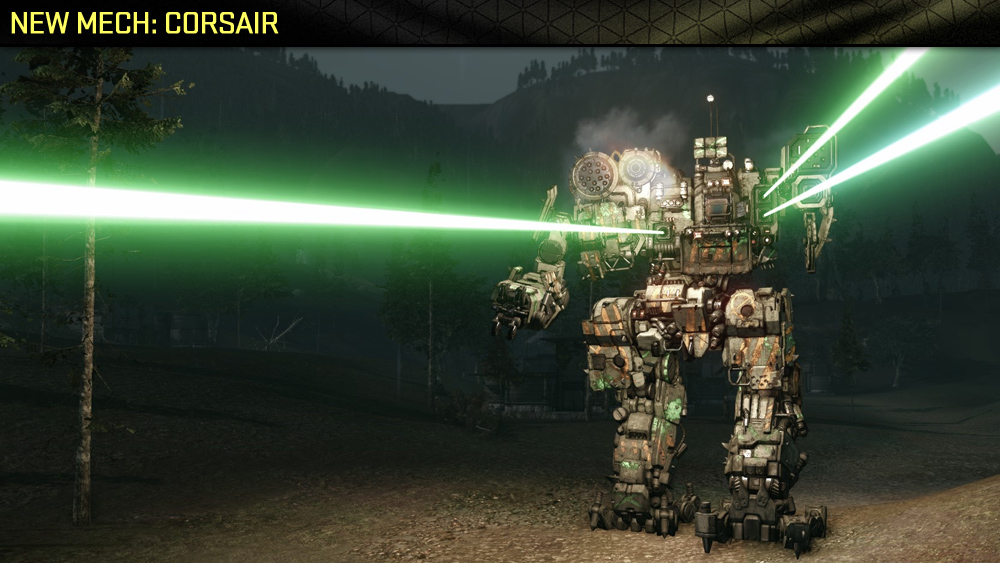 You can check out the Countdown post for more details about the Corsair 'Mech as they are released! 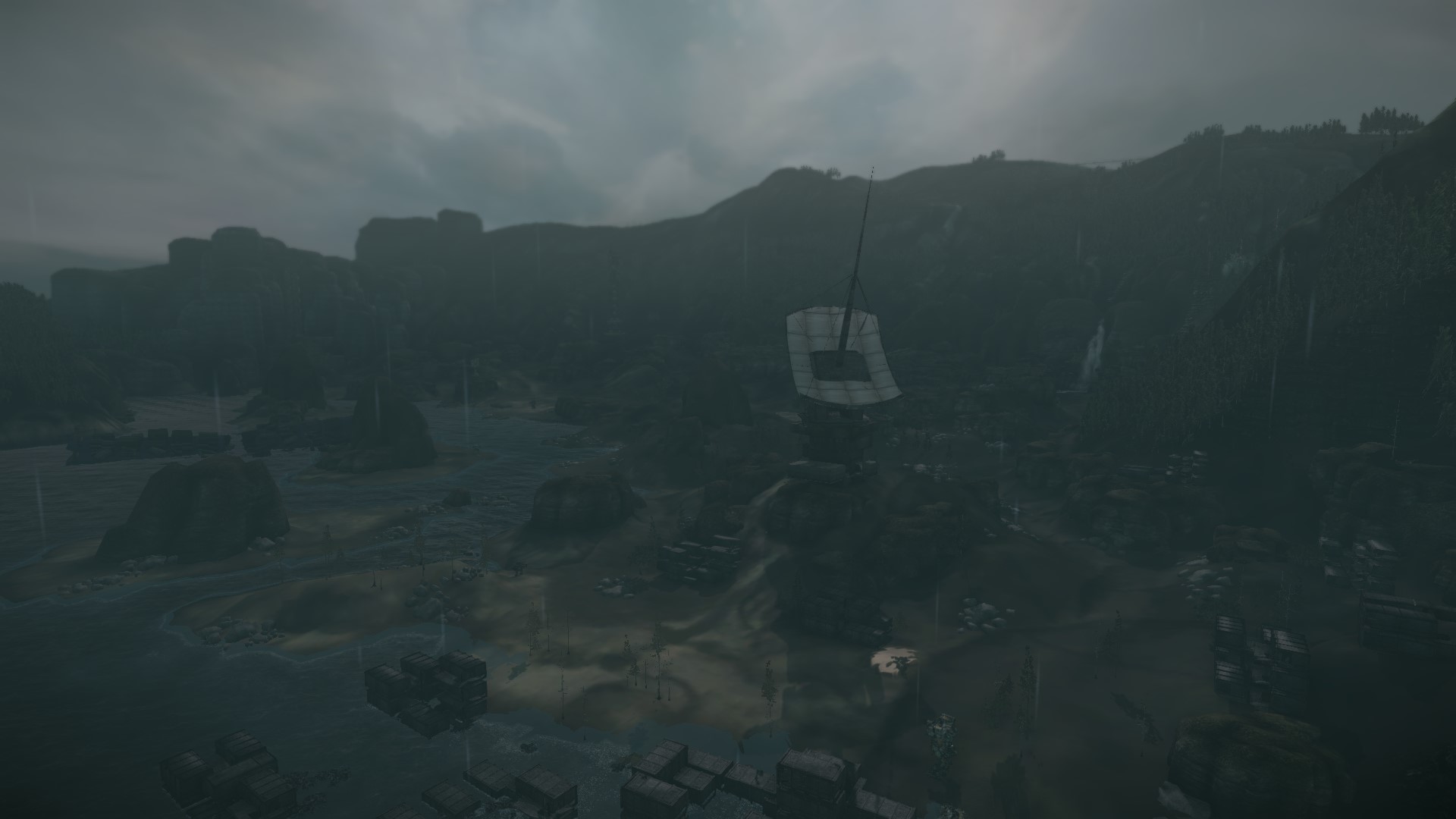 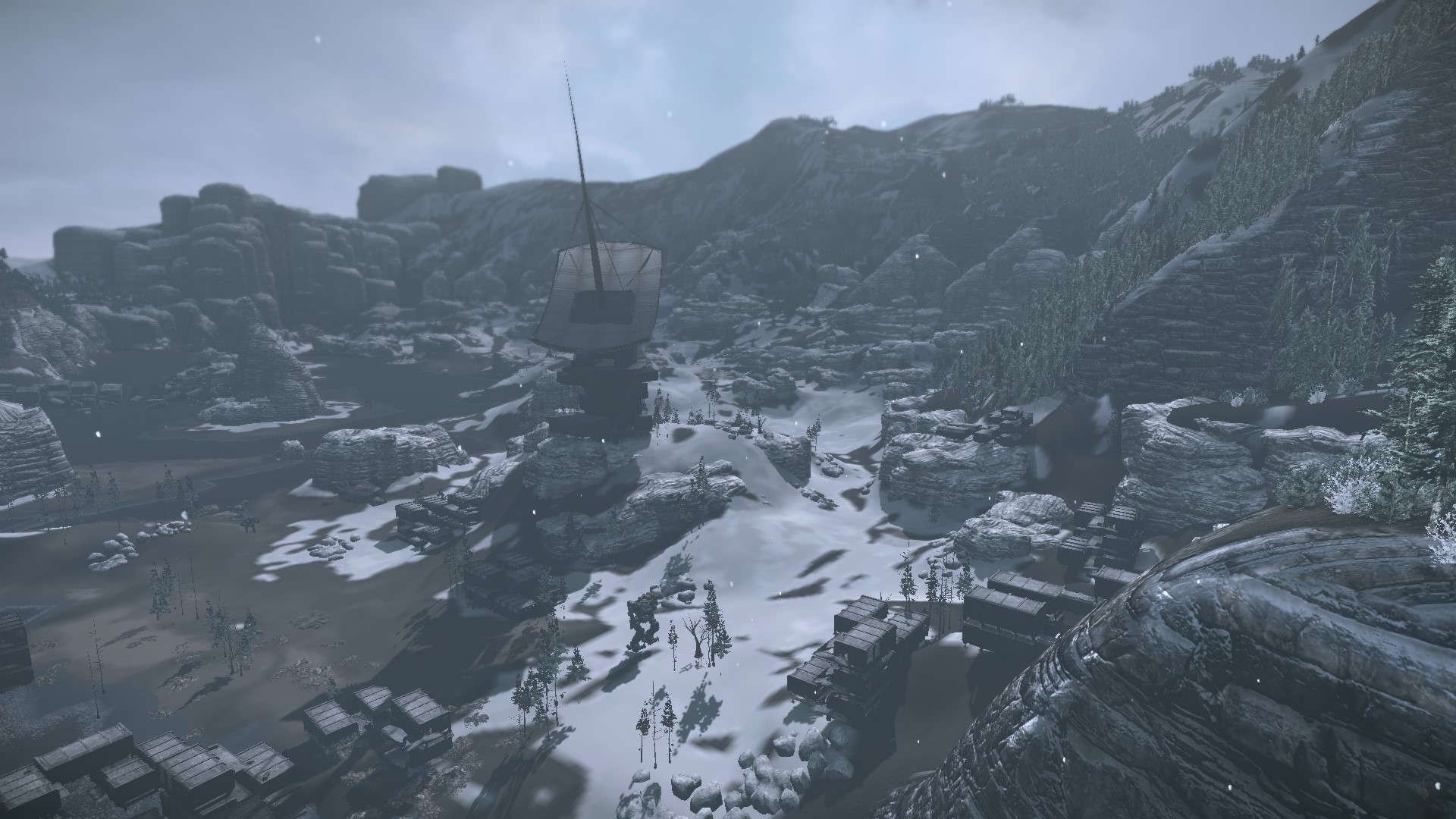 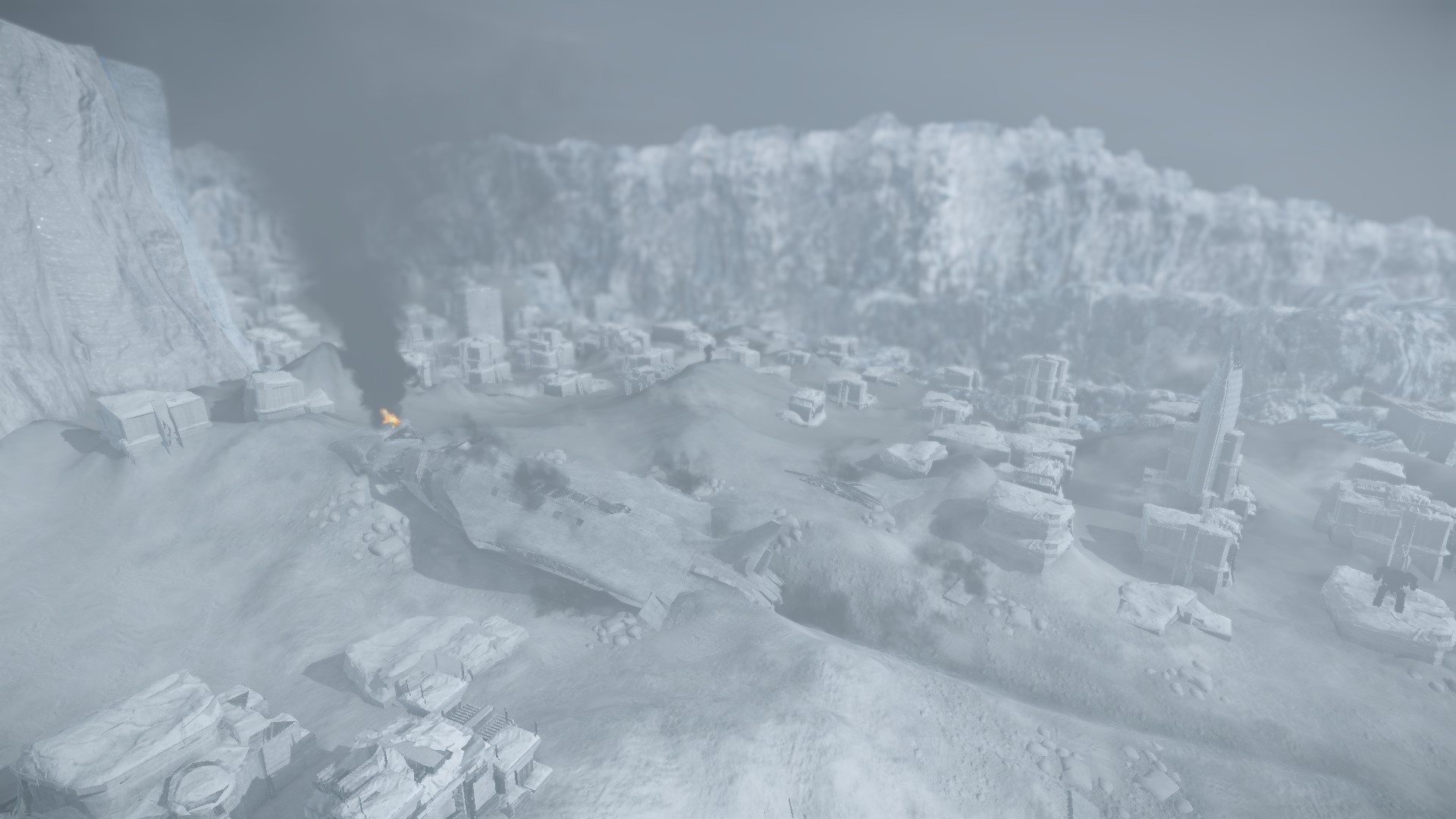 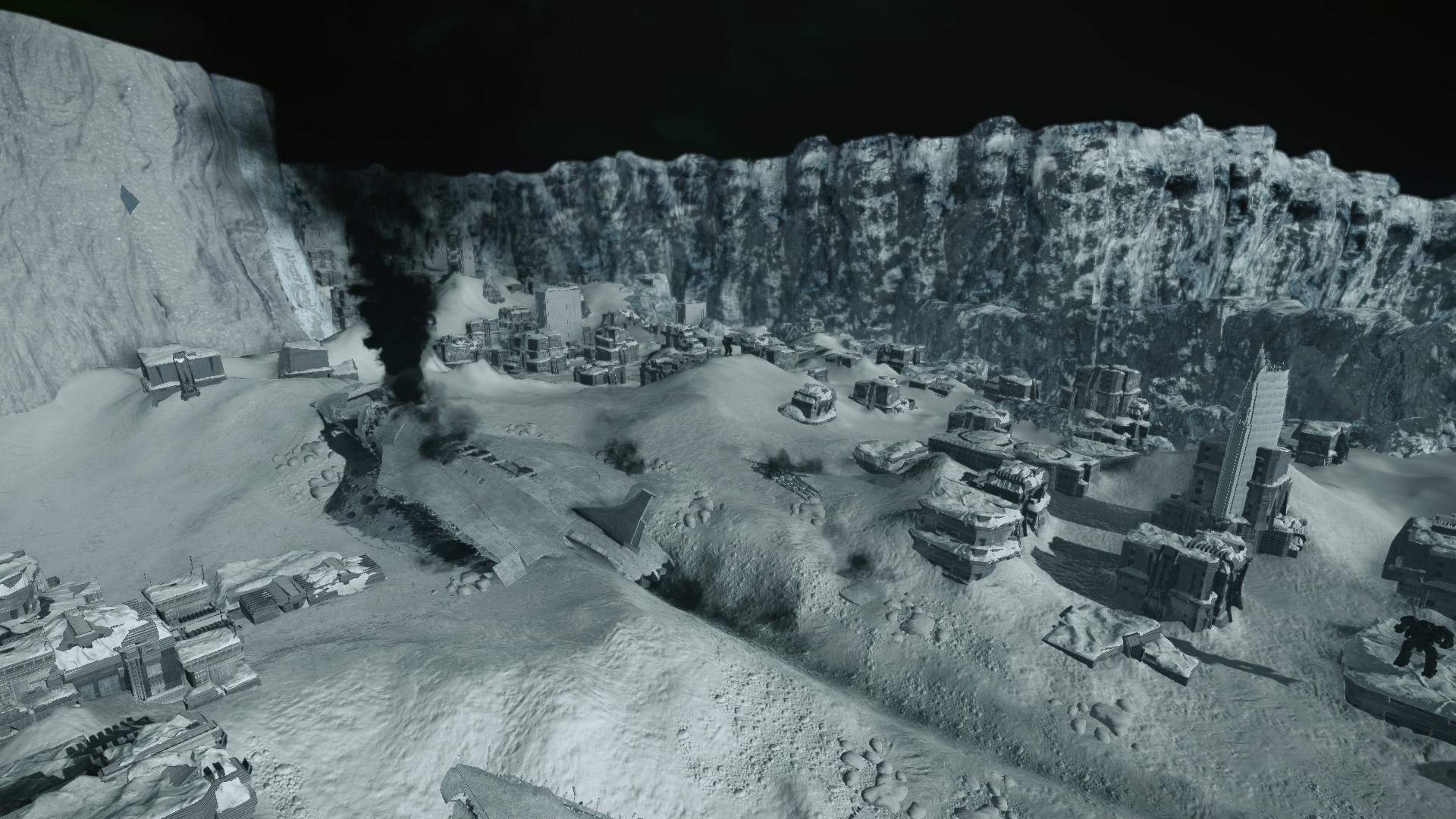 Based on the results of the recent LRM Updates PTS and player feedback, this month we are releasing a very large overhaul of a number of systems that feed into the LRM weapon systems.  This overhaul has been focused on the following points:

The net sum of the changes being introduced this month result in a major re-work of not just LRMs as a weapon, but also the core weapon lock-on mechanics and the way that various equipment interacts within these systems.  With these changes we are not aiming to subvert the utility of indirect fire in favor of the weapon becoming more apt at direct fire, but to provide a proper weapon and system balancing pass in order to better reward those that do expose themselves to return fire when using LRMS, while providing more direct drawbacks to indirect fire that make it more difficult to use effectively at extreme ranges without team coordination.

We have decided to move away from a universal weapon lock-on system into something with more depth depending on your overall position and ‘Mech configuration relevant to the target you are attempting to acquire a weapon lock on against. While also bringing more direct importance to the sensor system with how it relates to indirect fire weapon locks. Like LRM direct vs. indirect fire, the weapon lock-on system will now be broken up into two distinct states dependent on if you have direct LOS to the target or not.

No Direct Line of Sight:

The video below demonstrates the difference between Direct LOS locks, compared to short range indirect locks compared to extreme range.  Note that there are intermittent steps between the short and long range lock-on process dependent on the target’s relationship to your max sensor range.

Design notes: We want to put added emphasis on the fact that the values gained through this new system and tested through the PTS series are considered “baseline” values.  And as such, they will bear the brunt of lock-on time buffs / debuffs more severely depending on their relationship to the target.  This is particularly important when it comes to how ECM interacts with target time against out of LOS targets under ECM cover.

In these cases, the increases to indirect fire time associated with being under ECM cover are now more pronounced against targets at longer sensor ranges, while closer sensor ranges will have the equipment behave similarly to how it operates now, with extreme ranges being particularly prohibitive to indirect LRM usage while the target is under ECM cover.  This is intentional.  As we want to see one of the primary benefits of ECM cover is to act as a further impediment to indirect locks and an aggressive counter to extreme-range indirect LRM fire.  Pushing players to counterplay around these drawbacks through direct LOS locks, which are not impeded at any range, nor get any lock-on time debuff from ECM, or coordinating with team mates in a number of ways to either counter, subvert, or brute force your way through the drawbacks now associated with indirect lock-ons.

The core change coming with this patch to LRMs will be the addition of unique LRM behavior dependent on if a firer has direct line of sight to its target or not at the time the weapon is fired.

LRM volleys fired within LOS will now have new functionality that conveys the following changes over their current implementation:

No Direct Line of Sight:

Below is a video highlighting the net results of these changes. Please note that we utilized dev-tools to achieve the indirect fire examples despite it being within direct LOS in order to properly highlight the differences in the new arc behavior:

Design notes: In addition to the number of changes targeting the new functionality being introduced this month, we are also rolling over a number of heat related nerfs to LRMs tested through the PTS series. With all launchers gaining a bit more aggressive heat scale penalties, with clan launchers seeing their base heat increased in addition to the heat scale penalties.

With this patch, we will be moving away from a global missile health setting to one that allows for finer tuning when it comes to individual missile interactions against the AMS system.  The net effect of this change will see better efficiency for AMS against larger missile volley sizes, in addition to having a much more pronounced effect on non-LRM based missile systems.

AMS (Both Clan and Inner Sphere)

Below is a video example of TAG’s new functionality in action compared to a base long range weapon lock.

Design Notes:  One consistent bit of feedback we received through our tests of buffing direct fire LRM, but toning down indirect fire LRM was that there was still a desire to reinforce indirect fire potency through the use of team based equipment such as TAG and NARC. And that any nerfs we took off of the baseline LRM equipment should be rolled over as perks to the TAG and NARC systems. On this front we were in agreement. With the expanded functionality of the Weapon Lock-On system, and the new penalties to the spread from indirect fire, we feel it is fair enough to have ways of re-introducing LRM’s current indirect potency provided it is accomplished through teamwork with specialized equipment.

When it comes to TAG, we are rolling the Weapon Lock-On property previously associated with TAG into the core Direct Fire Lock-On mechanics. Because of this, we are eliminating this boost on the base property of the weapon in order to further reinforce its primary role as a team boosting piece of equipment rather than a personal enhancement device.

For NARC, we are only providing it with the boost to spread. This is due to the fact that the base NARC equipment keeps a sensor lock even outside of indirect LOS to the enemy. This is to allow a bit more time to respond to your ‘Mech being NARCed before longer ranged bombardments have a chance to lock onto you. However, locks against you will still have boosted spread potency.

Design notes: As ATMs will be equally effected by a number of downsides being introduced with the changes to lock on weapon systems, we will be giving them a velocity boost along with the LRMs to coincide with the changes made to the weapon lock-on systems.

When it comes to spread value, while this is listed as a new stat, this is actually something that has been present on the launcher for a bit now.  ATMs in the fiction are built with integrated Artemis systems.  To replicate this bit of lore within our game, we replicate Artemis’ behavior through the equipment itself.  With the change to the way direct vs. indirect spread works with LRMs, we will also be exposing this value that was previously hidden on the baseline ATM launchers.  Like LRMs, we have applied a 10% nerf to the indirect spread for ATMs, but this was taken using the pre-Artemis properties of ATMs that previous was only something visible behind the scenes.

With the large buffs to the baseline properties of the AMS systems, we received PTS feedback that the new settings combined with a number of ‘Mechs with high value AMS quirks ended up shutting down missile play rather than acting as a soft counter for missile systems.  While we still intend to keep AMS quirks as a part of a number of ‘Mechs flavor quirks, we have made an effort to tone down a number of these quirks to account for the incoming baseline balance changes.  Some will see reductions, some will see their benefits shift over to set of 8 quirks, and some will see their quirks fully removed.  A brief summary of the ‘Mechs that will be impacted by these changes:

The following ‘Mechs have been provided with new HSL quirk assignments:

Design notes: The Hatamoto-chi has performed a bit below the curve for our liking, and as such, will receive a bit more in the way of durability quirks.

Design notes: We quirk ‘Mechs based on the final in-game model approved by the Art team.  With the incorrect model being submitted for review previously, this meant that we would have to re-evaluate the corrected model entirety.

Exact details to be provided in the PDF change table here.

KNOWN ISSUE
Solaris - Group member will automatically unready shortly after they ready up
Note: It seems like the Group Leader needs to be on Solaris game mode screens as it did not happen when the leader was in the MWO home menu
Patch Files (Direct Download)
To make the patching process easier for players with limited download caps, we'll be providing direct download links for the patch file(s) that comprise this patch. This will allow you to download the patch file(s) elsewhere, for manual injection into the MWO patcher through a Patch Cache folder.
Aside from allowing you to download the patch file(s) elsewhere, on another connection, there are no additional benefits to performing the patch this way; the patching process itself will be the same.
This direct patch download process will only work for players running the standalone client. It does not apply to players running MWO through Steam.
Patch File(s): http://patcher.mwomercs.com/patch/Production/frontend/FrontendPatch_356.zip
How to use these patch files
• Download the above file(s)
• For sake of ease we recommend creating a dedicated folder for the patch file(s), such as 'MWO Patch Cache'
• You do not need to unzip or unpack the patch file(s)
• Launch the MWO Portal
• Select the three horizontal lines in the top left of the Portal Window
• Choose the 'Specify Patch File Cache' option
• In the field that appears, paste or enter the location in which you saved the patch file(s) and hit OK
• For example, C:\Users\<username>\Documents\MWO Patch Cache
• Click the blue Patch button
• The launcher will now check the Patch Cache folder you defined. If it locates the required patch files, it will unpack and use those files to apply the patch.
• Once the patch is complete, launch the game