Upcoming Patch - Tuesday, July 21st @ 10AM – 1PM PDT
Tuesday, July 21st @ 5PM - 8PM UTC
Patch Number:   1.3.413
Patch size: 652.85 MB
Greetings MechWarriors,
The remaining transport armadas for Wave 3 of the Clan Invasion have breached the Inner Sphere. In the wake of destruction left by the advance forces, the Arctic Cheetah and Shadow Cat are now available to all eligible pilots. Continuing the standard established by the Executioner and Ebon Jaguar, these last two Wave 3 'Mechs are releasing with full Pattern functionality.
Badges and Titles provided through Clan Invasion Wave 3 and the Clan Trilogy promotion will be injected into eligible pilot accounts during this patch, while Faction Content for Wave 3 will become available for selection once the servers return from patch maintenance.

The European regional servers are now live! The feedback we received during the Public Test session was extremely positive, with pilots across Europe reporting drastic improvements to their connection stability and overall playing experience. Pilots in North America who participated in this test reported higher but very playable ping rates, so we're confident that North American pilots will be able to include themselves for selection in the European matchmaking pools with no major impact on their experience.
The remaining rewards from the Hardcore Unit Event will be injected into eligible player accounts during this patch, with the Top 3 Units for the Inner Sphere and Clans receiving their unique Unit Dog Tag Hanging Cockpit Items.
Rounding out today's patch we have the release of a dedicated crash reporting tool, some additional improvements to the host-state rewind algorithm for lasers and other continuous-fire weaponry, improvements to location sync when 'Mechs are colliding with one another, an array of texture and geo fixes for certain 'Mechs, fixes to the Community Warfare queue system, a fix for OmniPod icon displays in the MechLab Warehouse, and more.
Looking ahead to August releases, work is still underway on the Forest Colony overhaul (check out some quick sneak peeks here and here), along with comprehensive redesigns for the 'Mech Select screen and Spectator Tool. Players in the Oceanic region will also have their own reasons to celebrate, with the activation of regional Oceanic servers to complete our recent server expansions.
So until next time, read on for all the details of today's patch and we'll see you on the battlefield!
- The MechWarrior Team
Change Log
New 'Mechs:
The final two Clan Wave 3 'Mechs are now available in-game for eligible Wave 3 owners:
Arctic Cheetah / Hankyu (Light)
Originally designed and manufactured by Clan Ice Hellion in the year 3037, Clan Smoke Jaguar's subsequent conquest of the manufacturing facility on planet Foster allowed the Jaguars to add this formidable Light 'Mech to its own arsenal. Under their banner the Arctic Cheetah first saw combat against the Inner Sphere at the Battle of Luthien, where it was dubbed the Hankyu ("short bow") by the forces of the Draconis Combine.

As an ECM-capable Light 'Mech with a stock speed of 129.6kph and enough firepower potential to stack up against the strongest Light 'Mechs of the Inner Sphere, the Arctic Cheetah excels as a medium-range offensive scout.
•Release date for MC: September 15th
•Release date for C-Bills: October 20th
Shadow Cat (Medium)
Preparations for the Clan's 'Operation Revival' were long underway prior to the initial invasion in the year 3049, and it was with this in mind that Clan Nova Cat started rolling Shadow Cat's off the production line in the year 3003. Even before the invasion the MASC-equipped Shadow Cat easily distinguished itself on the battlefields of the Clan Homeworlds as a highly-maneuverable and well-armed Medium 'Mech.
As with the Arctic Cheetah, the Shadow Cat first saw combat against Inner Sphere forces during the Battle of Luthien. However, unlike the Arctic Cheetah/Hankyu, no Inner Sphere pilots managed to survive an encounter with the Shadow Cat until its appearance at the Battle of Tukayyid four months later. This grim distinction contributed to the Shadow Cat being one of the first Clan 'Mechs not to receive a unique designation from Inner Sphere pilots.
As an ECM-capable Medium 'Mech with fixed MASC and tonnage to spare, the Shadow Cat excels due to its excellent scouting capabilities and capacity to equip a wide range of weaponry.
•Release date for MC: September 1st
•Release date for C-Bills: October 6th
Loadout details and discussion of these new 'Mechs can be found in a dedicated post here.
European Servers

Players now have the option to select which of the currently available server regions will be considered when searching for a match. The addition of European servers will greatly increase the playing experience for players in and around the European region, with considerable reductions in server latency (ping) and a consequent impact in critical areas such as hit registration and player input responsiveness.
Connections to these European servers originating from within North America are strong enough for effective play, so we recommend that players in the NA region include the European region in their server selection window.
This is how the Game Mode and Region Selection window will appear when you first enter the client after applying this patch: 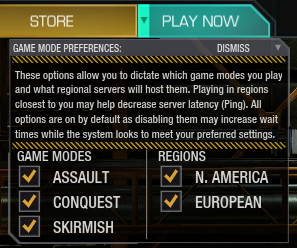 As you can see from that image, the currently available server regions are North America and European. Oceanic servers are scheduled for activation on August 4th.
When a particular server is unavailable as a result of maintenance or technical issues, its listing in the Regions section will be grayed out.
Crash Reporting Tool
We have added an external crash reporting tool called CrashRpt, which will help us to greatly simplify the reporting process in the event of a client crash.
When faced with a client crash, CrashRpt will bundle together the associated crash dump file along with various MWO config files and a system-level DirectX diagnostic file. These are the same files that the MWO Support services will typically ask you for if you were to file a standard technical support ticket. There is a known issue in this initial release that may prevent the DxDiag from being compiled into the crash reporter if you are running below Windows 8.1, so until that issue is resolved Support services will follow-up with you to retrieve that information if necessary.
CrashRpt will run after every crash, but submitting the crash reports to us for review is entirely optional and requires your confirmation. The CrashRpt window will cover all of the details contained in any such report, and will allow you to submit additional comments and/or an e-mail address through which you can be reached for follow-up communications.
Once given the go-ahead, the tool will send the crash report and related files directly to Piranha Games for review.
New Items
Camo Patterns
•  Arctic Cheetah is releasing with full Pattern functionality
•  Shadow Cat is releasing with full Pattern functionality
Badges and Titles
•  Clan Trilogy Loyalty Badges and Titles are now available for eligible pilots
•  Wave 3 Loyalty Badges and Titles are now available for eligible pilots
•  Hardcore Unit Event Badges and Titles are now available for eligible pilots
Cockpit Items
•  Hardcore Unit Event Dog Tags are now available for eligible Unit pilots
Gameplay Fixes and Changes

•  Made a change to the way the host state rewind algorithm handles continuous-fire weapon (i.e. Lasers, Flamers, etc). This should improve their effectiveness in situations of variable latency.
•  Improved the client desync issue that sometimes occurs when 'Mechs collide with one another.
'Mech Fixes and Changes
Awesome
•  Fixed a texture issue with Lasers
Ebon Jaguar
•  Additional ragdoll fixes (apologies to all breakdancing enthusiasts)
Executioner
•  Fixed a texture issue with PPC's
•  Fixed a Cockpit Item orientation issue
Thunderbolt TDR-5S-T "Top Dog"
•  Improvements made to the texture maps and base color stats
Trebuchet
•  Updated the Crusader and Polygon Patterns
Vindicator
•  Fixed an issue where Cockpit Items would not appear in the MechLab
Wolverine WVR-6R(P)
•  Fixed an issue with the Head laser hardpoint
•  Fixed an issue with the Left Torso missile hardpoint
MechLab Fixes
•  Fixed the mismatched OmniPod icons
Community Warfare Queue Fixes
•  Fixed an issue where the Planetary Queue information would be incorrect when the Queue contained only Strike Teams
•  Fixed an issue where a Strike Team would lose its place in the queue if someone in the Strike Team left
Map Fixes and Changes
•  Canyon Network: Fixed a shadowing issue in the river
•  River City: Fixed an area in F5 sector where 'Mechs could get stuck
•  River City (Testing Grounds only): River City will now loop its Time of Day cycle inside Testing Grounds instead of stopping at the end of night
Other Fixes and Changes
•  We've added a Special category to the Titles and Badges screen. This category will be used to hold conditional or otherwise unique Titles.
•  The 'Hearing Impaired' Title (provided only to players who are hearing impaired) has been moved to this Special category.
•  Fixed an issue where the in-game Achievement Notifications do not popup in the first match of each new client session.
'Mechs Now Available for Purchase In-Game
Loadout details for these 'Mechs can be found in the May 19th Patch Notes.
BattleMaster BLR-2C
• MC price: 3,720

Loadout details for these 'Mechs can be found in the June 2nd Patch Notes.